The thing that really appealed to me about doing a Desert Bluffs costume was the thought that if my friend was going to carry around a little hooded figure, I could have a StrexPet. For those not in the know, StrexPets are engineered, bio-mechanical pets made by StrexCorp, the shady company that buys Night Vale at one point and presumably owns Desert Bluffs. Even though I’ve heard them a few times, the episodes that are broadcast by the Desert Bluffs cast are some of the few that actually creep me out, and I love it.

The problem with doing a StrexPet is that, like most everything else in Night Vale, it’s not really described. That’s part of the allure of the podcast, but when you’re used to having reference material, it gets a little harder. All that’s really said in the actual episode “The Visitor” is that the one featured has “huge duck eyes, puffy fur like that of a bear cub, a thick round belly, and no discernible arms and legs, but only little nubs that flit about as it slowly moves across the ground.”

The first thing I did was google what other people had done, because I always want to know the line so that I might crush it.

Oh, what? We all have to have a hobby.

All I saw were varying degrees of puffballs and a lot of really cute drawn fan art. It was hard for me to connect the 2D stuff I liked to an actual 3D interpretation. I looked at tribble patterns, baseball patterns, basketball shapes, any and all oval plushy shapes, even certain shapes of plush animal feet. Somehow, I suddenly realized that I needed to not be looking at shapes per say or real animals and start looking at manga-inspired plushies and drawings. From there, I hit upon the idea of going for something that was somewhere between a hamster and a buffalo.

Yeah, I know, believe me, it makes sense in my head.

By time I figured out that pattern, I had done a bunch of other mockups, so it was nice to have something that actually worked. After the basic body was produced, there was just a matter of ears, a tail, and little stubby legs. For the body, I used fur I had left over from Paddlelump’s hair last summer. Granted, I do think that in the future I’ll look at Hancock’s for fur instead of Joann’s – this stuff is fine, but if you brush it the wrong way you see mesh backing, and I haven’t had that problem with Hancock’s stuff…though theirs isn’t as wild and tends to be more plush than long. In all Strexy is probably a little bigger than football size, enough to stick under my arm and freak people out when I hide him under a blanket or behind a door. 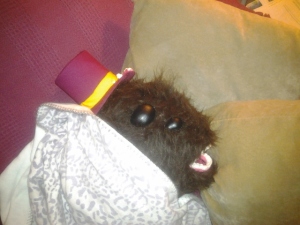 Not that I would ever do that…

For the eyes and nose, I used old vinyl off a coat. I loved the idea of multiple eyes, though it took me some trial and error to hit upon how many eyes and how to line them up. Collar was done out of the same orange from my outfit and some craft foam and a sharpie.

I left it like that for a long time, but one of the themes of StrexCorp is teeth.I had looked up denture jewelry on Etsy and wasn’t able to afford those accessories, but loved the concept.

It took a lot of trail and error there, as well, but I eventually was able to cast some solid teeth, add some gums, and glued the whole mess to a velvet covered mesh piece for the mouth. Then it was just slicing the head open and popping that sucker in there, more or less. Strexy was complete, and he remains magnificent

In so many ways.

The top hat was supposed to be worn by me, with a matching one in Night Vale purple worn by my friend, but we didn’t realize how hard it was to keep those suckers attached to your hair. Instead, both our plushies ended up wearing them. For the hat I used the mesh backing usually used for needlework. It’s awesome – I’ve used this for puppet pieces and all sorts of structural stuff. You can sew through it, it has nice stability, and I totally prefer it over cardboard. 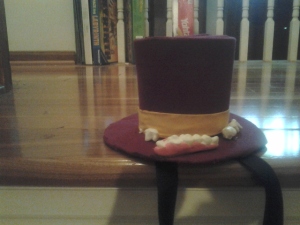 I pretty much eyeballed the size I wanted, then cut out a length for the body, and circles for the brim and top. There are a few ways to do mini hats, but I stitched the fabric on, then put the whole thing together, then added clips and a tie and decorated with some spare teeth I’d had from various molding experiments. As one does. It wasn’t a total loss, though, because Strexy enjoys dressing up and there is nothing so adorable as a StrexPet in formal wear.

Although this admittedly terrifies me.