So I realized that in my ramblings about Evillecon and all that in March, I left out a huge part of that weekend.

We all know I love books, but I really have a mad addiction to libraries. I’ve loved them ever since I was a kid. I still remember the very first library trip I ever went on in Illinois that was converted from an old house. My parents checked out There’s a Nightmare in my Closet for me and I made them read it over and over, amazed that I could hold a book I didn’t own as long as I promised to bring it back. I was actually accidentally locked in that same library years later. Like all kids, I freaked the hell out until I realized that I was in a library, then attempted to read as much as humanly possible in like ten minutes. My mom was with me and managed to get the librarian to come let us out, so my fun time didn’t last too long (This also leads to a tangent thought that it must run in our family that kids get themselves locked into places because family mythos also involves quite the tale of The Sibling getting stuck in a bank vault, but that’s another story…)

By the time I lived in Indiana, I was old enough to go to the library on my own, and I went All. The. Time. Not gonna lie – I was one of those kids that walked through the awkward forest and got hit by every falling leaf on the way through, so it was the perfect place to escape and dream, all the while pretending I really wasn’t learning anything. When I was dealing with bullies or family stress or school pressure or a thousand other stupid little things that don’t matter now but hurt a lot back then, I ran and hid in the shelves. I went back and forth between levels, partially because of the younger sibling, but partially because sometimes I needed a break from heavy stuff. It’s a habit I still invoke from time to time.  I realized I hated the teen books most of my friends liked there, got turned onto nonfiction there, devoured the entire music section there, read way too many Star Wars titles there, listened to my first Bowie cds there, and discovered folklore there. I still remember a book of Irish ghost stories that shook me up and I  came across two major influences there: Women who Run with the Wolves, which I’ve read countless times and probably inspires some of my more emotional fiction, and the collection of Cinderella Stories that I reference in Olde School. That book would not have been written had it not been for the Alexandrian Public Library, so it was a thrill when they let me come back and do a signing. I remember seeing Stephen Kellog there, and Nancy Carlson, Gary Paulson, Tales and Scales, and local storytellers. Those people were magic-makers to me, people I wished I could be when I thought that I was limited to what I was at that moment.

However, I totally snuck into Mt. Vernon a few days early just to orient myself and banish any residual emotions and ghosts. As I’ve alluded, since I hadn’t been back in like fifteen years, there was a lot of memories and emotions welling up. As grateful as I was to spend time with all who I visited with, it was important to me to have some private time on my own terms, to go through all the changes in front of my eyes and reconcile them with what was in my heart and in my head. Life has changed considerably between now and the Bronze Age, and it was good to walk the hills where I use to sled and dodge tomb stones, drive by the cemetery I learned to drive in (I swear that isn’t like a total life theme), meander the streets…

and yeah I totally snuck in and stalked the local library. The playground is way better now than when I was there, but everything else is just the same. It’s crazy. It even smelled the same, from the little annexes to the kid’s area with the walk-in train engine. The only thing that’s really different is the giant Arthur statue I helped make as a kid is gone, which is probably for the best. It was strange walking the stacks…I felt like  a ghost. I half expected to see fragments of memories running by me, playing out some distant time which had already taken place. I actually remembered where most everything was. No, seriously. The only things I couldn’t find were the music books, and that’s because the nonfiction sections were rearranged.

These books have not moved in fifteen years. Seriously, my teen paws were all over these things. I don’t know why I found that so funny, but it really amused me, especially since I have a somewhat different opinion of the EU than I did as a kid. I immersed myself in that series as a teen, though, wanting to will myself into a hero that could face everything head on and win within three hundred pages until the next adventure.

This book was new when I was like nineteen, twenty. I was so pumped when it arrived and I POURED over it. The only book that would have been better was a hardback collection of Rolling Stone interviews where I read my first David Bowie interview and decided that he was well and truly IT. All the sheet music I used to borrow for school events are still there. All the series I used to love – still there. Like I said, I felt like a random ghost walking the aisles and getting strange looks.

Yeah, never thought I’d see this coming when I was ten. 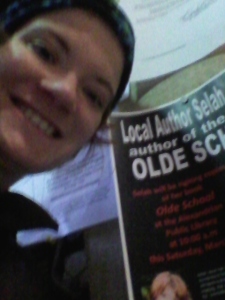 I totally texted this to everyone I could that evening.

I love libraries. To me, they’re filled with countless portals to countless possibilities. You can learn anything, find things that make you feel harder than you thought you could. Maybe I’m a romantic at heart, but there is something important about these meeting places that are slowly being forgotten. I get the internet and buying books online have their uses, but to have a place to escape among other people who are also looking for something more than themselves in simple pages…there’s power there. There’s possibility. The Alexandrian is where countless bound stories intersected with my personal one, and I’m all the richer for it (except for all the money I’ve spent on overdue fees through the years, though that was well spent in the scheme of things).

I was extremely lucky to have people that I grew up around and were influenced by come to see me. Since most of the librarians who moved me aren’t there any longer, that was also what I was most nervous about. Let’s face it – no one is who they are a year ago, let alone fifteen  years ago. I’m not the loud but shy egocentric I was at nine, I’m not the naive idealist I was at fifteen, I’m not the embittered but determined girl of eighteen or nineteen. I’ve seen a lot of life since then, yet I’d also forgotten that everyone else has, as well. It’s amazing how places stay as time capsules in your mind, so it was just as big of a shock to me to see that everyone else had moved on, as well (I know, that’s vain of me, to think I’m the only one with any sort of a life, but it’s easy and convenient to forget these things, isn’t it?).

In some ways it was a relief to see that people had grownl up as well, that I wasn’t a total outsider. That theme was reflected in visiting my old college campus, as well, and staring at some of my mentors across desks again. Strange how different it feels when the pressure of grades and graduation is off, but it can also leave one fumbling for things to say.

Sure, we may not understand every part of each other, but the willingness to come together and catch up and to see what I’ve been up to, the willingness to listen…that was amazing at that library signing. Okay, so I’m no Gary Paulson. I’m not JK Rowling or Neil Gaiman. I never claimed I was – I’m me. I want to be myself as an artist, and I want people to embrace my work because it is from me. The utter outpouring of love, joy, and curiosity – it was what I’d needed after some heavy thinking holed up in a motel a few nights before. In a lot of ways it’s made me turn and face myself and accept that I’m more capable than I’ve allowed myself to believe. It’s freed up a lot of headspace to move on and see what happens next – all the while not forgetting that I’ve got people to catch up with when I roll through town again.

I was nervous as hell all through the event, but the fact that people were there and willing to see this part of my life was empowering. It was necessary. And for a brief moment I almost saw the gangly, pimply, awkward kid running around the carpeted aisles or poking around at some after school activity or trying to carry a gigantic stack of books that was way too tall for her.  It was one more chapter in the story of me, and that is the power of libraries.

A huge, huge thank you to those that came – even if it was just to say hello. And for those that didn’t get the chance…I’ll catch ya next time, eh?

One thought on “Coming Full Circle”