To mix things up, I thought I’d talk a little bit about a project I did recently. The friend who introduced me to Welcome to Night Vale is also who I went to the live show with, and we decided that just showing up wouldn’t do. This is probably the closest I’ve ever gotten to cosplaying in my life, and besides a gown commission I did in February, it’s the first ensemble I’ve done since Paddlelump last summer. We talked a little bit about who we could go as, but since we really wanted to showcase our skills and own special blend of eccentricity, we just weren’t sure…until she hit on the idea of us each going as one of the towns in the podcast. Since she’d gotten to the fandom first, she obviously got Night Vale. That left me with the pleasant, yet gloriously creepy town of Desert Bluffs. 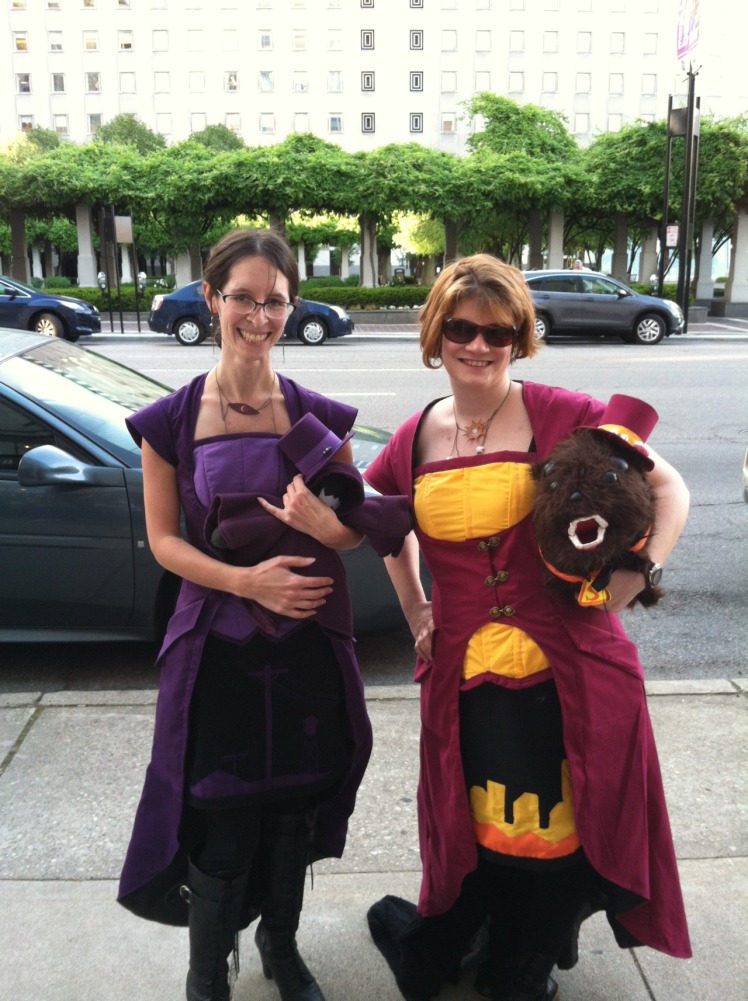 She did the jewelry, I did the top hats and plushies, and we did our respective outfits. Not bad for a week/week and a half of work. It’s one of those things where I wanted to do it, but actively making myself sit down and figure things out and sew again (after sewing all day at work)..eeecccch. Don’t let anyone ever make you believe that creative people/artists love what they’re doing 24/7. That is a lie. Especially when there’s good tv on and all we want to do is fall onto the couch after a long day.

Still, I’m pretty stoked with how these turned out, and the sheer fact that it’s been forever since I’ve done non monster/creature/male clothes.

We decided that Simplicity pattern 2172 could be modified to suit our needs. The sleeves and ruffle were dropped from the jacket since it was getting to be summer, and we went with a different skirt pattern. Basically the coat was done as is save for leaving off bits (I shortened the back ties, as well, because I am graceless enough without dragging tails along, to boot). I also opted for clasps instead of buttons because again, honest confession time: I’m tired, I was doing this after a full day at work, and I didn’t want to get everything right and then ruin the thing because I got the buttonholes wrong.

Did the same bodice from the pattern, though here’s where my friend had it way easier. This is the downside to having an hourglass figure. I know you think you want it. Everyone thinks that’s the body type they want. No, no it is not, because nothing ever freakin’ fits and even patterns are a pain if they’re supposed to be somewhat body-hugging. To make things easier on myself I cut to the biggest size of the pattern I could, used canvas instead of interfacing, put that and the top layer together, then pinned every loose-fitting part in as much as I could, darting in parts of the seams where needed. Once things were taken in I put in the boning (another neat trick when you have a huge amount of seam allowance: stitch the seam allowance down and let it be your boning channels instead of adding more pieces), and finished it up. We decided to do the bodice fabric as the coat ties, to keep the color scheme. 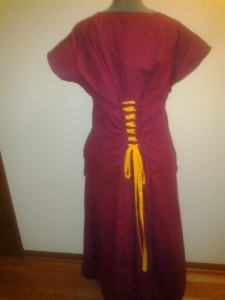 Skirt was from an out-of-print pattern, and we wanted to applique the town part of the logos onto the bottom edge. This is where my friend totally beat me because she got all the power lines and everything on hers and i ran out of time and didn’t get the radio tower spindle on mine. Meh, I’ll have to embroider it on later. This was also where I found a way to incorporate the orange from the logo. Because the skirts were black, the color schemes for Desert Bluffs were somewhat reversed and I had to figure out what would actually look best and make things pop. The eye of Night Vale and the Sun in Desert Bluffs ended up as our necklaces because I cringed every time I thought of trying to applique that sun. 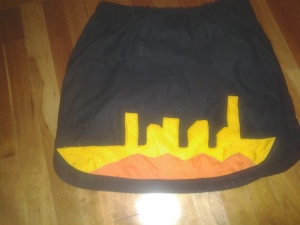 Where the Night Vale logo has three or so specific colors, Desert Bluffs is a little trickier. I really, really didn’t want to walk around in straight yellow and orange, so I opted to have the coat as the font color of the logo. The bodice had started as orange, but honestly the gold/off-yellow I found really went better with the maroon, so that was that.

I’m happy with the way things turned out and we did get a ton of compliments, so that’s a definite plus. There is something mildly thrilling about seeing Mara Wilson stop in her tracks and look at you, and go “Wait…you’re Desert Bluffs!” We’ve also been told our outfits are “awesome” and “banging” by various cast members from the show, so mission accomplished.

It was definitely something to be back making regular (female) clothes, so I’ll probably be putting myself back through my paces every so often in these next few months. It was the slight kick I needed, though I’m probably going to focus on writing first for a little bit, because I need to get back in the swing, there, too.

As for the five million accessories we had to go with our outfits? Oh, don’t worry, there will be pictures…