Since it’s been ten thousand years since I’ve done an author interview that’s not part of a blog tour, I figured we should get back to it, eh? After all, it’s fun to see what the process is like from different types of writers, and I love picking people’s brains about their thoughts on genre. So without further ado I bring you today’s author friend, Wade Garret! 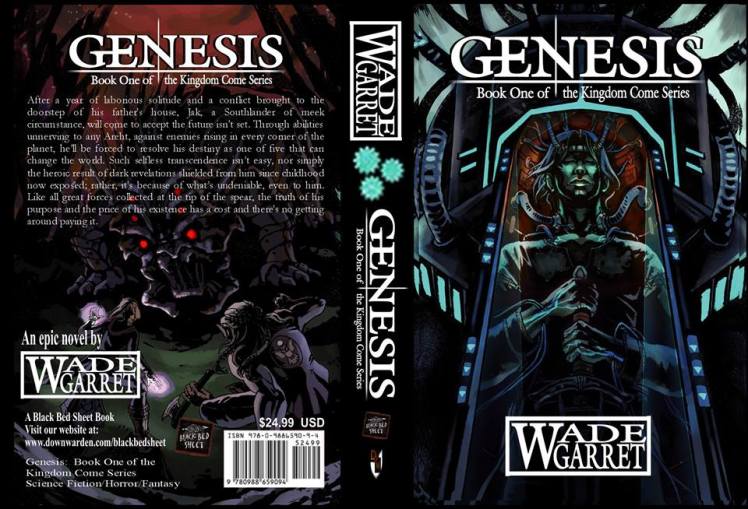 SJ:   Every writer has some sort of process. Give us a glimpse into yours.
WG: Mine’s more of a hack’n’slash approach. I know the beginning, middle and end, points in-between, then I start writing. If I outline, it’s only about a chapter in length. Finished, I reread and reread, putting in, taking out; it’s kinda messy but I feel better about it. I’m not one to spend so much time banging out a fully realized outline without making a single keystroke. My brain doesn’t work that way.
SJ:  Are you a meticulous planner or do you believe in the muse?
WG: The Muse all day and twice on Sunday. I plan, but only to a point—big picture or climatic moment stuff; most of my best details or coolest ideas come in the rewrite/reread of a particular scene.
SJ:    Where do your ideas come from? Do they result in a shady deal with a dark power?
WG: They come from everywhere. At odd times, too. They’re a mixture of my own creations and spin-offs or blendings of things I’ve seen or read. As a writer, you have to constantly be reading: this teaches you what works and what doesn’t; also, it gives you a framework by which to make an idea yours or better than previously done. If the ideas came from a bargain with a Dark Power, I think I’d be famously wealthy without a day of writer’s block. Sadly though, that’s not the case.
SJ:    If you could only write one genre ever again upon pain of being sacrificed to Cthulhu, what would it be and why?

WG: Maybe this is cheating, but I’ll say Speculative Fiction, which means I like a stew of genres. Allowing me not to be pigeonholed, I can pick’n’choose what’s possible via the lens of a particular story’s level of technological achievement. Perhaps it’s more influenced by the Supernatural? Through such a unique framework, I can do w/e I want and in such a way that it doesn’t seem out of place.
SJ:    What’s your biggest frustration as a writer?
WG: Have you seen the images on Facebook where it reads, “This is what My Friends think I do; This is what My Family thinks I do” and so on, that’s a broad look at what’s frustrating about being a writer.
SJ:   What do you consider the downside, or is there one?
WG: I don’t know if there’s a downside. Like all things, this is a choice and with that, I understand and most importantly, I accept the “opportunities” that come from being a writer—even if sometimes I cuss about it into a pint or when I’m not able to sleep. Nevertheless, for me, there’s nothing else I’d rather be doing. Everything else I do is because I’m not yet able to do this full time.
SJ:  Is there any cliché that makes you want to wring people’s necks?
WG: 1 “Writing is easy. I could do that.” People don’t realize how often you can sit all day at your computer, maybe, maybe get a dozen hundred words on the screen—that’s a pretty damn good day—only to delete half them or more the next day. Or maybe, you bang-out a few books before anyone takes the time to read one, let alone publish it.
2 “Why don’t you…” The Business of Writing, which means knowing at times if you’re not doing what’s popular or “selling” at a particular moment, you’re only hurting yourself. People say it all the time but how about Professionals, too? I had an agent tell me once she liked my writing, but wondered if I’d be willing (hinting she might publish it then) to write XY&Z cause it was “trending” and therefore had a greater potential for a quick return on the publisher’s investment. Now, I get that and that’s ok, it’s a business. However, realizing that agents/publishers aren’t necessarily looking for New and Unique content, so much as what’s Like and/or Similar to something already out and doing well is a tough pill to swallow.
SJ:  Do you think it’s possible to develop a sure-fire recipe/formula for success as a writer?
WG: Yes and No, because it depends upon what you mean by Success. If you can dominate an already successful series, like Star Wars, making your take on it the most popular, even better than the original, than yes. And I’m cool with that kinda thing because it’s clear what you’re doing. Likewise, if you can “copy” what’s popular—Teen w/e; Boy Wizards; Some kinda Reality Show type drama—you can be successful. But this is where it sometimes bothers me. Disclaimer: The Copy bit is always in the eye of the beholder and it’s thrown around a lot in the Science Fiction & Fantasy genres.
If asked to dabble in another author’s world and I was a fan of it, sure, that’d be cool, but I couldn’t stay there forever. And as I said before, I was asked once to fall into the trend and I couldn’t, but this isn’t to say in the future, when trends have changed, that I won’t finally write a Vampire story, sorry, not for teens. I think timing is key in a lot of these circumstances. You can kinda tell when publishers/agents are trying to jump on a particular bandwagon. And again, it’s business, it is what it is.
SJ:   It seems like everyone likes to gang up on certain genres as being inferior, less meaningful, or cheap entertainment (especially if it’s speculative in nature). Make a case for the genre you write

WG: Fantasy, Science Fiction and Comics have spawned such great stories and characters that’ve changed the world, yet they all get downplayed compared to Literature. And if you don’t raise your nose when saying Literature, you’re not doing it right. Honestly, how does Historical or Non-Fantastic Fiction, which is often considered True Literature, compare to the social impact of Conan, Sherlock, Batman, Captain Nemo, F451, 1984, Welcome To The Monkey House and so on?
SJ:    What do you want people to instantly think of when they hear your name or your work mentioned?

WG: First, that I’m humbled by those who came before me. This includes many with works I don’t like, because the fact is they MADE IT, despite opinions like mine, they’re where I want to be and that means they found an audience—that’s all we can ask for.
About my writing specifically:
Keep the words of Kyle Reese in mind, “Listen, and understand! That Terminator is out there! It can’t be bargained with. It can’t be reasoned with. It doesn’t feel pity, or remorse, or fear. And it absolutely will not stop, ever, until you are dead.”
The takeaway from The Kingdom Come Series, of which Genesis is only the beginning, is what the conflict between the (Truly) Good and the (Truly) Evil should really mean; rare as they should be represented in any story. Skipping the Light/Good side, I’ll say sometimes the degrees of EVIL or what’s represented as Evil “The Enemy” isn’t always made as brutal or dark as it should be. Also, there are times, critical or cumulative, where it’s made to be, well, dumb. Making Evil stupid, allows the Good to survive and escape to fight another day or to win when you wonder why Evil wasn’t better prepared—I try my best not to find myself in those kinda corners, you’ll have to tell me if I succeed or not. So, if the varying shades of  EVIL are to be feared, really feared, across the entirety of the series, they can’t become a joke. We all know the jokes about Storm Troopers, right? Ok, so my baddies and their bosses won’t become jokes like that, the heroes will always fear/respect them. The characters who don’t (as does happen) well, you’ll know what color shirts they’ll end up wearing before long. My Star Trek Fans know what I’m talking about.
SJ:  Please tell us about your latest work.
WG:     Overall Blurb: Jak Hartlen, 19, the son of William and Mary, will face many thresholds of flesh and mind on his road to reaping the Whirl Wind; seeds of grief and guilt only now coming to fruition. If only they’d know what they were doing…
The Gan and their Areht who shape the world behind the scenes will hate him, because he’s a threat they’re not sure can be chained.
The Pillars and their Faithful who spread the world’s leading religion will fear him, because his existence, once known, will challenge Ages of dogma and accepted history.
The Crimson King and its Servants who seek to return to power, destroying all that remains of The White, will hunt him, because even in death, they’re not sure he’ll ever bow to the Dark.
—They All Should. For as One of Five with the power to shake the world, they’ll hollow his heart and mind through countless sacrifice and vengeful selfishness.
Back Cover Blurb:
After a year of laborious solitude and a conflict brought to the doorstep of his father’s house, Jak, a Southlander of meek circumstance, will come to accept the future isn’t set. Through abilities unnerving to any Areht, against enemies rising in every corner of the planet, he’ll be forced to resolve his destiny as One of Five that can change the world…
Such selfless transcendence isn’t easy, nor simply the heroic result of dark revelations shielded from him since childhood now exposed; rather, it’s because of what’s undeniable, even to him. Like all great forces collected at the tip of the spear, the truth of his purpose and the price of his existence has a cost—and friend or foe, there’s no getting around paying it.
Publisher’s Blurb:
The true test of Man, is to see if he can stand naked before himself without blinking. The same trial of existence for a God, however, even one created, is if when he blinks, will he change or the world…
Genesis: Book One of The Kingdom Come Series, is an ambitious, Speculative Fiction story in the epic tradition of Dune, The Dark Tower and A Song of Ice and Fire. Blending elements of gritty Steam/Diesel-punk and realistic sword-wielding Dark Fantasy, this stand alone’s cross-over appeal ranges from Y.A to the mature Science Fiction and Fantasy book lover. Readers seeking a strangely familiar world of intrigue, intense action and mortal failings vs the injustice of power and spiritual corruption will be drawn to this book. And once caught in its exciting pages, they’ll quickly learn what really separates man from what is Evolved. 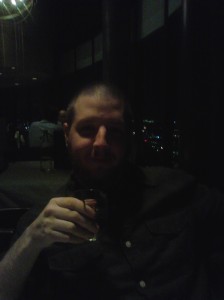 You can purchase it in a variety of formats on Amazon, B&N or from the Black Bed Sheet Book’s site—any small bookstore can also order it.