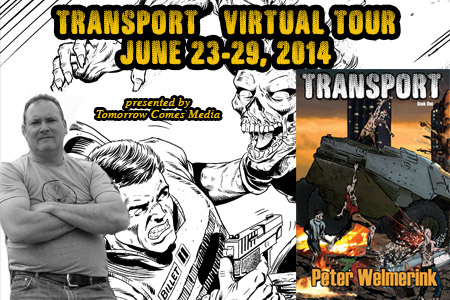 I’m back with a blog tour post for my pal peter Welmerink! I think you’re really going to dig his new book, Transport. After all, everyone loves zombies, right?

The HURON, a 72-ton heavy transport vehicle and an army of four; tracked, racked and ready to roll, to serve and protect the walled metropolis of Grand Rapids—both her living and her undead. Captain Jacob Billet and his crew patrol the byways, ready for trouble.

William Lettner, the North Shore Coalition High Commissioner, has enemies from the mainland to the lakeshore and needs to be covertly transported home after his helicopter is shot down en route to Grand Rapids. He has no love for a city that give unliving civilians the right to survive. Lettner’s venomous outbursts assaults Billet and his crew along every mile travelled as they are assigned to safely bring him through the treacherous landscape outside the city back to his hometown.

The HURON and her crew will have to face domesticated zombies and the feral undead; marauders holding strategic chokepoints hostage; barricaded villages fighting for survival, and a group of geneticists who’ve lost control of one of their monstrous experiments if they want to complete their mission.

The crew will need to stay strong and trust one another in order to finish the mission and bring their “precious” cargo home, even knowing, all the while, the terrible deeds Lettner has done.

Travelling through West Michigan was never so dangerous.

Peter’s provided us with a character post today involving Loutonia Marie Phelps and Bob the gas station attendant, so let’s see what transpires… 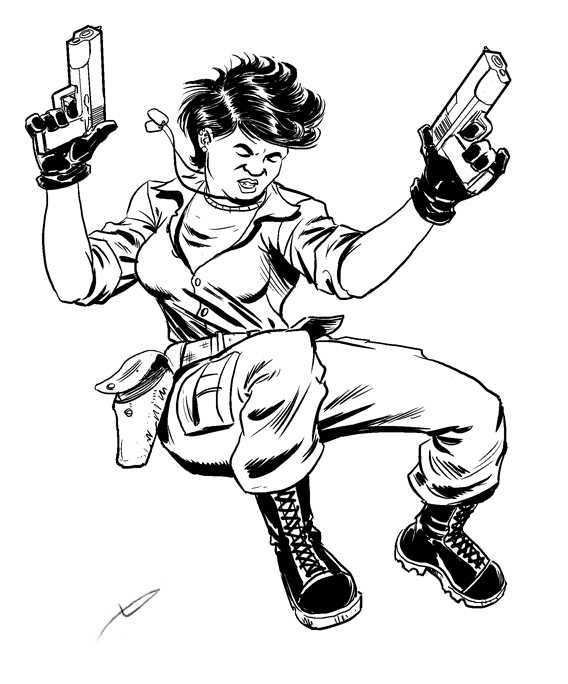 This is Loutonia Marie Phelps. Lance Corporal. Serial number 32 738 306. Marine. Though that really doesn’t mean much, what branch of the service you are from, as these hard times mean pooling and pulling together as one truly united team.

I am the driver of the HURON, a big M213 Ridgerunner-class HTV (Heavy Transport Vehicle). I am the only female member of our crew, the only female M213 driver of what is left of our fleet of those vehicles. It’s not a bad job, considering the world we live in, not a whole lot can damage or go up against my 72-tons of dual-wheeled and tracked, heavily armored bone-crushing transport.

Okay. I have some additional information I’d like to put on record. I figure I’d better log this just in case… Well, in case anything happens that might make this all relevant.

I am writing this while out at Jake’s, I mean, the Captain’s ex-in-laws lakeshore cottage. While he, Stokes and Mulholland are outside closing up shop at the beach house (and I think Stokes is still walking funny from the night before when I had to kick for the extra point), I thought I’d jot this down before we got back on the road.

On our recent mission, when we were carrying our “special cargo,” we stopped while within the UCRA and “talked” to Bob.

As you know, the friendly neighborhood gas station attendant, in his rotted mind, still lives in the 1950’s, but Bob is special. A “satellite Zee,” we use him quite often to gather Intel on the goings on within and outside the Urban Civilian Retention Area, and beyond the city limits.

Trained in Zombie Dialect, I listen to what Bob has to “say” and translate it, informing Jacob, I mean, Captain Billet, what the old guy “knows.”

After Bob mentioned the “old news” about a section of highway way northwest of town being sabotaged, an event that happened years ago, with a clack of his loose jaws and black teeth, he said my children were in “Fat City,” and my ex-husband was in “Nowheresville” and wouldn’t be “rattling my cage” anymore.

Fat City, I looked it up, means a happy place. Nowheresville: a bad place. The Ex wouldn’t be rattling my cage, making me upset, angry, anymore anyway.

My late and abusive husband, as my children, are dead-dead.

I don’t know how Bob knew I even had a family.

But that wasn’t the oddest thing he had to say.

After mentioning Valley State University having a new mascot—their former mascot was a guy in a foam bull’s head—Bob started in on, I am not sure, events of the past? Events of the future?

Bob said, growling, coughing, yellow puss drooling from his dry cracked lips: “Captain will take his last visit home to be finished by your hand. The ghoul girl eats at her father’s heart. Our home will be open once the second killing rain falls from the sky.”

More gnashing of teeth, moaning, three wet coughs: “Your money council is a shuckster. Watch the water and the big weapon that wanders out from your grasp.”

I had not known Bob to talk in such a manner. Riddles, yes, but he seemed hell bent to make sure I listened to what he had to “say.”

It was then some of the other neighborhood walking dead started getting too close for comfort. We had dropped meat crates for a feeding, but hadn’t cracked them… and our neighborhood friends were hungry.

Bob grunted, growled, and made a sound like he was clearing his throat.

“What was that?” Jake, I mean, the Captain, had asked.

I made something up. I said: “Bob says he’s got a special on a lube and oil change.”

What he said, with what little flickers of lucidity an old dead guy could muster: “No worries, Miss Phelps, I will protect your man when first death descends.”

He simply stood and waved at us as we left, as if we’d just arrived.

That was how Bob rolled.

But those last “words,” the old dead gas station attendant’s words, then and now, I simply cannot shake. 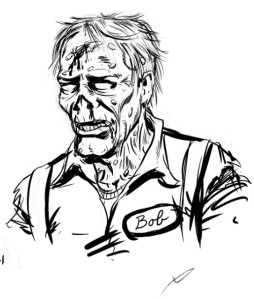 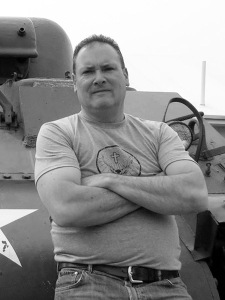 Peter Welmerink was born and raised on the west side of pre-apocalyptic Grand Rapids, Michigan. He writes Fantasy, Military SciFi, and other wanderings into action-adventure. His work has been published in ye olde wood pulp print and electronic-online publications. He is the co-author of the Viking berserker novel, BEDLAM UNLEASHED, written with Steven Shrewsbury. TRANSPORT is his first solo novel venture. He is married with a small barbarian tribe of three boys.

Find out more about his works and upcoming projects at: