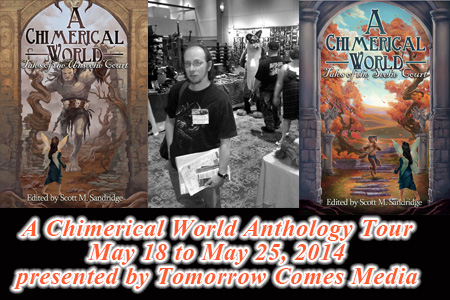 I’m really excited to host this particular tour. I absolutely love faeries and tales of their worlds and antics. I grew up on faerie tales, fell in love with Irish folktales in my tweens, and have consumed work by artists like Brian Froud with a fervor. It brings me great pleasure to tell you about these books, so I’m going to get right to it!

The Fey have been with us since the beginning, sometimes to our great joy but often to our detriment. Usually divided (at least by us silly humans) into two courts, the first volume of A Chimerical World focuses on the Seelie Court: the court we humans seem to view as the “good” faeries. But “good” and “evil” are human concepts and as alien to the Fey as their mindsets are to us.

Inside you will find 19 stories that delve into the world of the faeries of the Seelie Court, from authors both established and new, including George S. Walker, Eric Garrison, and Alexandra Christian.

But be warned: these faeries are nothing like Tinker Bell.

Stories Included in Tales of the Seelie Court:

“Extra-Ordinary” by BC Brown

“Mark of Ruins” by SD Grimm.

“I Knocked Up My Fairy Girlfriend” by Brandon Black

“The Body Electric” by Sarah Madsen.

“The Last Mission” by Cindy Koepp.

“The Beggar-Knight & the Lady Perilous”

by Matthew A. Timmins.

“The Filigreed Lamp” by Edward Ahern.

“Like a Sister in the Proper Court” by Lisa Hawkridge

The Fey have been with us since the beginning, sometimes to our great joy but often to our detriment. Usually divided (at least by us silly humans) into two courts, the second volume of A Chimerical World focuses on the Unseelie Court: the court we humans seem to view as the “evil” faeries. But “good” and “evil” are human concepts and as alien to the Fey as their mindsets are to us.

Inside you will find 19 stories that delve into the world of the faeries of the Unseelie Court, from authors both established and new, including Michael Shimek, Deedee Davies, and Nick Bryan.

But don’t be surprised if these faeries decide to play with their food.

Stories included in Tales of the Unseelie Court:

“In Plain Sight” by Rebecca Leo

“The Wunderhorn” by David Turnbull

“I’ll Watch Over You” by Angeline Trevena

“The Enemy of my Enemy” by Deedee Davies.

“Prey of the Boggart” by Rony Blechman.

“Faerie Stories and the Bean Nighe” by Carmen Tudor..

“The Bet” by Jodi Ralston…

“The Fool and his Money” by Nick Bryan

“The Tamer of Beasts” by Doug Blakeslee..

“The Last Sword of Barrow Thorns” by Matthew A. Timmins

“The Rose and the Dragon” by Steven S. Long

“The Brothers Doran” by John A. McColley

I got the chance to interview my bud Scott Sandridge about these anthologies, so I’m really excited to see what he has to say.

SJ: First off, why faeries? What attracts you to the world of the Good Neighbors enough to want to do a two volume anthology set about them?

Okay, now for the long answer. Stephen Zimmer contacted me about editing an anthology for Seventh Star Press, so I pitched a few theme ideas. Among the ideas I pitched was an anthology about animal companions (Hero’s Best Friend) and what I had originally planned to be a flipbook anthology about faeries from both Courts. Out of the half dozen ideas I had pitched, he liked those two so much that he asked me if I was crazy enough to edit two anthologies at the same time. And just like a crazy madcap, I said yes.

But I received so many great stories about faeries that there was no way I could fit all the stories I wanted into a single volume, so we decided to toss out the flipbook idea and go with a two volume set instead. And that’s why we have Tales of the Seelie Court and Tales of the Unseelie Court.

SJ: Did you grow up reading about the Folk? What are some of your favorite stories or classic themes involving them?

SS: When I was a kid, my sister and I took turns reading A Midsummer Night’s Dream out loud, and I was hooked on faeries since. My sister’s mom, who I called Mammy, had the most awesome collection of Shakespeare plays and fairy tales books around (and I’m not talking about the Disney stuff, either; although, we had the old cartoons of those to watch, too).

As a side note, Mammy also had the entire Encyclopedia Britannica and a bunch of art books and science books (and read ALL of it), and yet she was also a Christian fundamentalist. So people who say fundamenalists are ignorant, dumb and illiterate don’t know who the heck they’re talking about. A person’s belief system has nothing to do with a person’s I.Q. [/end random rant that came out of nowhere]

I always enjoyed the magical “otherness” found in faeries of all types, whether they be the classic elves, dwarves, and goblins or the phookas and unclassifiables. You never can quite predict what they’ll do.

SJ: It seems as if there’s been a re-awakening in the interest of faeries within the past twenty or thirty years or so, especially among artists like Brian Froud and authors like Holly Black. Why do you think this subject matter is so timeless? Is there still room for more tales of the Folk, or is all the mainstream interest drying up the reservoir, as it were?

SS:I think it’s because we see a lot of ourselves in the Folk as well as a lot of what we wish we could be and hope we never become. There’s something about them that’s both alien and familiar all at the same time. And I don’t think the wellspring will ever dry up entirely, for they are the product of pure imagination and creativity. Their shapes and forms might change with the times, but their core essence is everlasting.

SJ: What draws you to the editing process? As an author, I definitely know the importance of strong editors, but it’s not a role that I’m necessarily drawn to, personally. What’s the allure?

SS: Originally I never set out to be an editor. I only wanted to be a writer. But after selling a few short stories to Double-Edged Publishing’s webzines (specifically The Sword Review; Dragons, Knights, and Angels; Ray Gun Revival; and later Mindflights), Johne Cook asked if I’d like to be a slush reader for RGR, and since I don’t know how to say no….

One event lead to another and through some unforeseen circumstances I found myself at Fear and Trembling Magazine as their managing editor for four years. It was at that time I caught the editing bug.

There’s a good feeling that comes with being able to find a gem in the rough and to work with an author in polishing that baby up so the world can see it. Finding already polished gems, of course, is a lot less work. Lol!

SJ:  Is the process of editing an anthology more or less difficult or fun than editing a regular novel?

SS: I don’t know if there’s a difference in difficulty, after all you still have to make sure all the spelling and punctuation is correct at the end of the day, but the process is different. With a novel, you’re working with one author unless it’s a collab, but even then it’s two authors at most. With an anthology, you’re working with multiple authors at the same time.

SJ: What can readers expect from the stories in this collection?

Faeries. Lots and lots of faeries: from elves to trolls to everything in between, prankish faeries, vindictive faeries, and even the occasional nice ones. And we span across different genres, from fantasy to sword & sorcery, “fairy tale” type stories, and even some science fiction and cyberpunk. Oh, and Horror.

SJ: Since the books are divided into stories of the Seelie and Unseelie Courts, who do you think would come out ahead in a modern battle between the two? Do you think each court would be pleased with the volume paying tribute to them?

That’s a tough call. Both Courts sport some pretty tough contenders, and even Seelie can be ruthless when they wish to be. But the Unseelie never fight fair, so they’d have the advantage on that end.

I hope both Courts are pleased. Angering one faerie is bad enough. I would hate to anger them all….

Wait. What was that in the dark creepy corner? OH SHI–!

Yep. I know that final sentiment well from writing in those realms. At any rate, be sure to check Scott out at all his links, and definitely check out the books! And for all the courts, well, If we shadows have offended…and all that <g>

Scott M. Sandridge is a writer, editor, freedom fighter, and all-around trouble-maker. His latest works as an editor include the Seventh Star Press anthologies Hero’s Best Friend: An Anthology of Animal Companions, and the two volumes of A Chimerical World, Tales of the Seelie Court and Tales of the Unseelie Court.