I’m back this week for Weekend Writing Warriors! I want to touch on a bit of a short I did for a magazine last year. This short, titled The Last Letter Home, is one of those three a.m. ideas, those things that grab you by the throat and won’t let you go until they’re written. Of course, it’s a weird blend of genres, but The Realm Beyond happily took it, and published it last year in Issue Three. I’ve had a fun time performing this one at readings, and it remains one of my favorite shorts. The story is in letter form, and the writer is a princess with an independent streak. She’s tired of living life under someone’s thumb and disgusted with her marriage choices, finding shortcomings in men of all walks of courtly life. And then she makes an unconventional life decision to, uh, go dragon, I suppose is the right way to say it, heh.

I assume by now that you’ve gathered that I was not, in fact, kidnapped. I chose to seize an opportunity. It’s all in the wording–you taught me that, Father. I assume you’re all very shocked and would disown me if I chose to show my face. Well, I choose not to! In fact, what I choose is to be happy. It may not be conventional, but it is a modern world and you must understand that not all dragons are carnal brutes who only wish to eat and destroy. There are always a few bad specimens in any species, a fact that is easily proven if you go down to the dungeons to examine the human equivalent there. 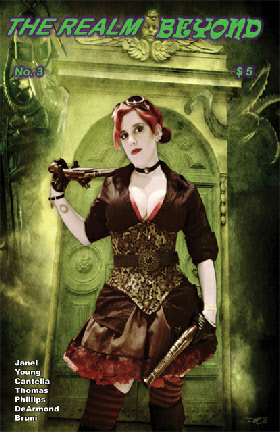 The Realm Beyond Issue 3