Today I’m thrilled to be able to take my eight from the just-released anthology, Thunder in the Battlefield (vol. 2, Sorcery). My story, The Ruins of St. Louis, combines elements of post-apocalyptic fiction, magic, adventure, a quest, a prophecy, and everything else that makes sword and sorcery kick-butt.

This eight follows notorious smuggler/pirate, thief, fighter, and royal Hunter Mann and the servant Arsin as they’ve just escaped a fight with a mutinous crew and fallen into the acidic waters of the Mississippi, Saved only by a hunk of bowsprit, things are going to get much worse before they get better.

“Behind us,” her companion whispered. Hunter craned her head and fought the shudder. The dark water rippled towards them in a long, steady streak that was wide as she was tall. Hunter held her breath the closer the trail of murky foam got. Tension crept into her every muscle as it drew closer, until it suddenly, abruptly ended at the far end of the bowsprit.

Arsin’s sweating face was tight from sun sickness and muted panic, but he remained frozen, intently scanning the water under them. It was far too dark and filled with muck to see anything that wasn’t right below the surface. Fish had long adapted to live in the water that could kill a human, and there were rumors of other things that lived in the Mississippi’s depths, things that were never seen but spoken of, anyway.

Want more sentences? Be sure to check out Weekend Writing Warriors! 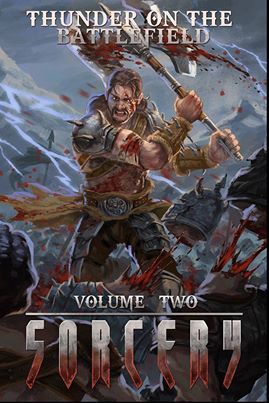 BEHOLD! the clash of war. Steel upon steel and heroes fighting shield to shield. The only true victory is a brave death and the destruction of your enemies. These stories harken back to a barbaric past that never was. A time when heroic men and women cut glory from the cloth of a sorcery-filled world and stole gold from the hands of the gods themselves. This is fiction that takes no prisoners. No quarter asked. No quarter given.

This is SWORD AND SORCERY.

6 thoughts on “WeWriWa: The Ruins of St. Louis (Thunder on the Battlefield: Sorcery)”