Evil. Why is it so fascinating when we’re warned about it from such a young age? Is writing evil a chance to play in that tempting playground without actually having to pay the consequences? Why are “bad” characters so much fun when we’re not supposed to like them?

For me,  I like to explore the nature of all sorts of characters. A person isn’t “good” just because they’re good, so  a “bad” person isn’t that way just because that’s how they’re born.  They have reasons and experiences that form their own personal code, and it’s doubtful they actually think they’re in the wrong or acting badly. I’m not writing away wrongdoings by any means, but to really write a multi-dimensional “bad” character, I’ve found that it helps to come at things from their point of view, just like I would any other sort of protagonist.

I’ve always been fascinated by what the villains’ lives are like in the books and movies I’m into. We see all about the protagonists or victims if we’re talking horror, but we don’t always get to see what makes these fascinating villains what they are. At some point they had to have been shaped by some sort of experiences or code. Something makes us what we are, no matter how we act. We all know by now that I love the movie Lost Boys (I know, I know, it’s the best example I could think of), and most know the basic gist: new family comes to town, family meets vampires, after different hijinks and interpersonal relationships, humans square off against vampires, humans win.

Here’s what fascinates me, though…until Michael got involved with the vampires, were they really doing anything wrong (besides the whole killing people because they’re vampires thing). They aren’t innocent by any means, but you could argue that they’re just like any other wild animal, albeit one that can masquerade in human skin. These guys have something of a family life set up, they’re settled, they’re doing their own thing, and along comes this human dude who’s after the only woman in the group, they bring him into the group, and then when he suddenly changes his mind the humans pretty much take it upon themselves to kill them all just to make sure Michael can turn back.

Writing evil characters really takes that flip of perspective, otherwise you get something closer to Snidely Whiplash.

It also interests me in that movie that they are settled, that there’s a little kid that they’ve turned for whatever reason…they’re not torturing him, so there’s obviously decency in there somewhere…it always frustrates me a little that none of the sequels showed things purely from the vampire’s perspective and made them the protagonists, simply because I feel like that was part of the success of the original movie. You don’t see a lot of the vamps’ home life in the original, but you do see enough to at least make you curious.

That’s where I tried to come from when I wrote my story for The Big Bad: an Anthology of Evil. My lead character, Rave, has been a vampire for sixty years, though he was in his early twenties when turned. He’s self-centered and doesn’t want anyone to tell him what to do, because he suffered through answering to someone stronger for a good part of his life. From the first line, he treats mortals the way he’d treat fast food and he really doesn’t care as long as he doesn’t get caught. A romantic vampire, this is not.

He has a little sister that he protects even though she drives him crazy and manipulates him on a whim. They’re running away from the very thing that kept them subdued for a long time, so there’s some kind of fear there. Not only that, but Rave runs into something he didn’t expect, ever…an actual hope of romance. He finds that he can actually care for a person, even though that’s a very new concept to him. He doesn’t quite know how to handle that, and combined with trying to escape future entrapment, he has a lot of choices to make.

Yeah, that’s the kind of story that fascinates me…what happens when a real vampire, the kind that doesn’t give a care about humanity or anyone else but himself finds that he’s falling in love?

The answer is probably not what you’d expect…but you’ll just have to read the book to find out for sure.

Suffice it to say, I enjoyed writing it immensely. At first I over-thought it, but when I finally let go and enjoyed Rave’s outrageous behavior, when I enjoyed Asha’s manipulations of her big brother, and when I finally got to introduce Sin…I had a hell of a lot of fun.

I suppose there’s a little evil in every writer, if they’re willing to be true to their bad characters and let it out on paper. 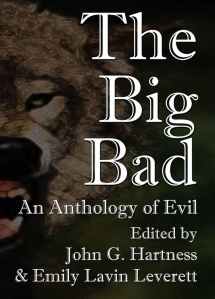 Everybody loves bad guys, and these are some of the baddest of them all. Forget the rules. There aren’t any heroes. No one is going to save you from the wickedness in the darkness. Monster hunters can easily become the hunted. Twisted perverts can find themselves on the receiving end of their own deviant desires. No matter how big and bad someone or something may be, there is always something bigger and badder just waiting. Even the classics like a dragon, werewolf, or supernatural being can fall victim to something even more evil. Take a peek, if you dare, inside the malevolent world of super-villains, monsters, demons and just plain evil folk. Be careful, what you see there might be disturbingly familiar …

One thought on “Writing Evil”