I love seeing what drives people to write, so I’m really thrilled by this guest post by Jennings Wright. She talks about the influence of NaNoWriMo and how it played an important part in a new and unexpected career. How cool is that? 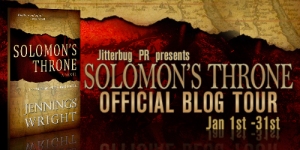 At 47, I have a new career. I feel a little like Paula Deen without the big hair and butter. Thanks to a crazy worldwide phenomenon called NaNoWriMo (National Novel Writing Month), which I did for the first time in November 2011, I am now an author. A published author! And not only that, I’m selling books. Weird.

I’ve always written, but other than ad copy and business writing, with the occasional letter to the editor or article, I haven’t been published. I had, in fact, decided after several aborted attempts at fiction that I just wasn’t very creative. My husband is a nonfiction writer, and I can always talk about… well, most anything, especially strange and useless facts, so I figured I’d join him in the nonfiction world once my homeschooling days were over.

Then along came NaNoWriMo.  I discovered it accidentally when browsing the writing section at our now-closed Borders; I came across a book called “No Plot No Problem” by Chris Baty. Turns out he is the founder of the event, which started as a lark with about ten friends and now has over 300,000 people participating each November across the globe. As more of a bucket-list, get it over with gesture, I signed up in July for the upcoming challenge.

Honestly, I was fully prepared to write crap. I knew I could write the 50,000 words needed to win, but I also knew it would be bad. I’d never been able to write more than 5,000 words of fiction in my life! But at least I’d have done it, and no one else ever had to read it. One thing crossed off the list.

That novel ended up being my first published book, “Solomon’s Throne.” Since then I’ve won five NaNo events and written one other novel in the NaNo format of 30 days. I’ve published two (the sequel to “Solomon’s Throne” called “The Hoard of the Doges,” and a Christian historical romance set in the Civil War called “Undaunted Love”). I have a YA sci-fi fantasy trilogy that will be released between February and June, and several other things slated for 2013.

In short, NaNoWriMo uncovered and unleashed a passion and a dedication that I’d never felt or shown in anything other than raising my family. I’m a type-B personality, and type-B personalities don’t do stuff like this. We aren’t really cut out for it! But somehow, some internal button somewhere has been pushed, and I think it’s stuck, because I don’t feel like slowing down (except for the occasional trip or day at the beach, and even then I take work!).

I love being a writer. I love finding cool historical facts and places and incorporating them in a book. I love hearing from readers that they were entertained. That’s my goal. I’m not trying to write the next great piece of literary fiction that will be taught and analyzed for years to come. I’m trying to entertain. I’m hoping to sweep the reader away for a while, and get them invested in the story. If I do that, I’ve succeeded.

I also love the indie author community. I’ve never met such a great group of people, who are from all over the world and all walks of life, who so generously share their experiences (good and bad), their contacts, and their knowledge. There are blogs, tweets, Facebook groups and professional organizations full of people just waiting to cheer you on, pick you up when you fall, and teach you what they know.

And it couldn’t have come at a better time. My husband and I have talked for a couple of years about moving once our youngest child graduates from high school. That happens in May. Our daughter is getting married in June, and then we’re going. Where? We don’t know! But now I know that, wherever we end up, I’ll be able to continue doing what I love. 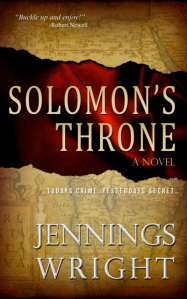 An impenetrable safe is breached and a secret artifact is stolen. Containing information that could change the course of the world, its desperate owner sends Gideon Quinn, his head of security, and Gideon’s wife Rei, an art preservationist, to find it at any cost. What they discover is a clue to the lost throne of King Solomon, the real object of the theft. They are thrust out on an adventure that leads them halfway around the world. Following letters left by a Jesuit in 1681, they must weave through ancient sites along the Portuguese Spice Route, keeping ahead of a secret militant order that is determined to beat them to Solomon’s Throne.

Filled with fast paced action and having broad appeal, Solomon’s Throne is an ingenious treasure hunt adventure that sweeps the reader around the globe in a race against time.

Born and raised in Rockledge, Florida, Jennings spent her early years reading anything she could get her hands on, when she wasn’t spending time in and on the water. She won a prize in the 6th grade for her science fiction stories.

Jennings attended the University of the South and the University of Tampa, graduating with a B.A. in Political Science, and almost enough credits for B.A.s in both English and History. She spent time over the years doing various kinds of script doctoring, business writing, editing, and teaching writing, but mostly having and raising her family, homeschooling her children, owning and running a business with her husband, and starting a non-profit to Uganda.

Thanks to a crazy idea called NaNoWriMo Jennings got back into creative writing in 2011 and hasn’t stopped since. She’s written four novels and a screenplay in less than a year, with more ideas on the drawing board. She currently lives in North Carolina with her husband, also a writer, and two children, and travels extensively.

My website is www.jenningswright.com
My writing blog is http://jenningswright.wordpress.com
My Twitter is @JenningsWright
My FB author page is www.Facebook.com/JSWwrites
My Independent Author Network page is http://www.independentauthornetwork.com/jennings-wright.html

To get in on the tour giveaway, please go to the Rafflecopter HERE