I thought I’d use today’s post to talk a little bit about some Christmas symbolism and how as a writer, I decided to use it.

Growing up, like most kids I was really into the holidays. I was also exposed to a lot of different facets to them. Originally, I hail from an area of Illinois that is filled not only with Christian-influenced customs but many German old-world aspects to holidays, meaning that I got exposed a hodgepodge of traditions and stories that went with them. This fueled my interest in that sort of thing, so whenever I stumbled upon a poem, story, or song that I wasn’t learning at school or finding in a hymnal, I was intrigued.

I think I first heard the song The Holly and the Ivy on A Muppet’s Family Christmas if you can believe it (the dvd version actually cuts out elements that aired in the original tv version so I don’t know if that song’s still in there). The peppy little tune was fun to sing and the words intrigued me. I had no real clue what they referred to other than plants, but I kept that tune tucked away in my heart for years. Occasionally it would get some exposure (madrigals and chamber choirs were good for this one), but otherwise it’s not always one that people know.

As I got older, my interest in holiday symbolism and the like grew and I began to do a little digging. Holly and Ivy have long been associated with Yule and usually represent male and female aspects to the point that they’re sometimes referred to as Yule King and Queen or King Holly and Queen Ivy. Holly is robust and strong, used in feasts and celebrations. There’s an older carol, though, that’s almost a call and response that I found fascinating. It talks about Holly being attractive and lively and Ivy being delicate with black berries and only the owls for company (and in a lot of early circles owls could be seen as either soothsayers or death bringers). There are several similar poems/carols that talk about Holly being warm in the great hall with the feasting while Ivy is left to shiver in the cold.

This fascinated me, but still, I wasn’t sure what to do with it.

I’ve been involved with the writing prompt group Tuesday Tales off and on, and one week I started working with the prompt Trees. It is no secret that I love fairy tales and I love faerie stories (usually two different things). I  hadn’t exactly started out writing a Christmas story, but I was fascinated with the idea of what would happen if a Christmas tree had a dryad in it. I’m sure there’s a lingering influence of Hans Christian Andersen in there somewhere – he liked to torment Christmas trees, too, but I couldn’t quite go into the dark territory that he does. The first sequence I wrote actually took place in the summer where the human woman who’s fed up with her life meets up with her childhood dryad friend and realizes that she’s actually real. Through that simple interaction I discovered that the dryad was childlike and excitable and the human, while more logical, longed for more.

I could work with that. I knew both ends of the spectrum and there’s a little bit of myself in both characters.

The Christmas scenes were hard to structure and bittersweet to write, but it wasn’t until I stumbled upon the character of David that things really fell into place. I didn’t want it to be an all-out romance, but really he was the catalyst for getting things to make sense.

And then I remembered the song and it took off.

Holly, as a human, may be a woman and she may be going through problems, but she has the ability to see the long-term. She’s part of a species that is robust and plows through problems (and over others sometimes) in an effort to keep going. During Christmas she gets to be indoors with the warmth, the family, the holiday cheer.

Ivy, as a dryad, may be old, but she’s fragile in this strange new world that’s developing around her. All she knows is her tree and what’s directly around it. Even her magic has limits and restrictions, and while she’s used to being outdoors, it can’t be easy to have the winter build up around you and only a tree for shelter.

Both of their personalities developed a little more around the archetypes until I had two complementary but distinctly different characters. Ivy struggles with trying to ensure the continuation of the dryads; Holly struggles with choosing between her own happiness and finding balance between humans and faerie.  And although I don’t always reference the line of my favorite carol, I tried to put the vibe there by discovering these two characters as women.

Curious as to how this translates into an urban fantasy Christmas story? You’ll have to read it to see for yourself, and I hope you appreciate all the little ins and outs that went into writing it! 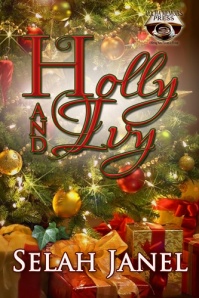 After losing her job and her boyfriend, Holly returns to her parents’ farm. Embarrassed and hopeless, she doesn’t expect to bump into a forgotten childhood friend that wasn’t supposed to exist. Ivy is not only a dryad, but she lives in the pine trees Holly’s family grows to sell at Christmas. As the old friends reconnect,Ivy not only shares her strong opinions, but gives Holly a charm that will change both their lives. As days melt into weeks and the seasons change, Holly’s life magically turns around. Christmas not only brings surprises, but a choice for the human woman. What’s more important: stability, success, and love, or keeping a promise to an old friend?

One thought on “The Holly and the Ivy, when they are both full grown…”