Today’s 12 Sentence Saturday comes from the second half of In the Red, where Jeremiah is continuously plunged into nightmares, though his reality isn’t much better.

The lazy street stretched on to the horizon. The tiny cracks that shouldn’t have mattered became gaping chasms that spit toxic flames and smoke up at him. Stabbing, pricking bursts of green and blue fire popped under Jeremiah’s skin and drove deep into his legs. He wobbled and nearly fell to his knees. Can’t stop. Behind him, in time to the instrumental the flames were channeling, footsteps echoed in a steady four on the floor rhythm. Can’t let it catch me.

“Yeah, well it’s not like he’s going to be doing much now,” a stop sign helpfully pointed out.

“No kidding. Not even someone like him deserves this,” a parked car replied.

“Deserves what?” Jeremiah whispered and made the mistake of slowing down. Heavy indigo smoke swarmed around his body and nearly dragged him to the pavement that scorched the bottom of his feet. 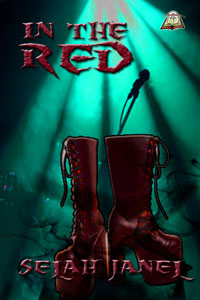 Dance ‘til you die.

What kind of a rock star lives in a small town in the middle of nowhere and plays at weddings and funerals? That’s what Jeremiah Kensington is thinking after an unsuccessful bar gig one night. Then Jack Scratch comes into his life, ready to represent him and launch him to stardom. Jack can give him everything: a new band, a new name, a new life, a new look, and new boots…although they aren’t exactly new. They once belonged to The One, a rocker so legendary and so mysterious that it’s urban legend that he used black magic to gain success. But what does Jeremiah care about urban legend? And it’s probably just coincidence that the shoes make him dance better than anyone, even if it doesn’t always feel like he’s controlling his movements. It’s no big deal that he plunges into a world of excess and decadence as soon as he puts the shoes on his feet, right?

And be sure to check out the rest of 12 Sentence Saturday!