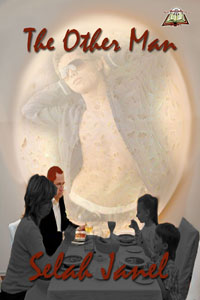 So in continuing with the celebration of my second release this week (That would be The Other Man for those keeping track; Just have another look at the half-clothed guy on the cover to remind you 😉 I have paused to reflect on relationships and all the weird little arguments that can turn into big deal breakers out of the blue. I forget what actually caused me to write this story but remember at the time I was surrounded by friends and family who seemed to be with a partner who had a problem with something they liked. I mentioned this in an earlier post that sometimes no matter how much you adore a spouse/lover/partner/significant other that sometimes things just change. Habits that were adorable start driving you crazy, the dreams that you built together suddenly change, or in this case there always seems to be someone else in the relationship along with the two of you. I’m  not talking about cheating – I’m talking about all those other people. It could be an ex that enters into every story your partner ever tells, a celebrity crush, or – in this case – a musician.

I haven’t had this happen to me per say…honestly I really don’t think in terms like that. Granted I don’t want to be surrounded by competition all the time (that’s the way my main character in the story feels) but really…I don’t get it. To me it’s a non-issue unless the stuff is just EVERYWHERE. I can see where it could get out of control I guess but really…I don’t get it. I seem to be more like the wife in the story who cluelessly exacerbates the situation. Granted, I haven’t dated anyone that took complete direct offense per say…but his friends all did.

It was never directly confrontational but for the entire time I saw an ex of mine I got heckled for my musical tastes. Constantly. Those who know me well know that there is David Bowie and then there is everybody else. Now I will be clear that I don’t listen to him 24/7 and since I stopped decorating like I lived in a dorm room my living space is not a shrine to him. At the time I was in an area and surrounded by people who didn’t get my love of glam rock/Brit rock/classic rock and I was still finding my way and very obviously expressing said loves. For example – I tended to dress like I thought I could bring 1970s glam Brit fashion to 1990s middle America (I can’t believe that didn’t work!). But the heckling and eye rolls and backhanded jabs were always about the music – to the point that I stopped listening to it.

I will tell you that was a very miserable time. To this day if I’m in a self-punishing mood the music is the first thing to go and it never works out. At any rate, getting rid of Bowie and all the rest wasn’t enough. Because then the issue was that at the time I was a sci-fi fangirl. Okay yeah…I did massively love Star Wars at the time. I will admit (with embarrassment) that I did have a lot of stuff – including a couple of cut-out standups. I would like to point out that while Obi-Wan Kenobi and Luke Skywalker were pleasant to look at everyday they actually served another purpose – clothes hangers. Jewelry and accessories tended to get draped over them and it was a really good use of space in a really tiny apartment. But I tried to not mention the series as much and keep the merchandise to a minimum.

So then the problem was that I liked a lot of nostalgia. Again – I was still decorating like I lived in a dorm so I had a lot of movie posters – at the time they were cheap and an effective way of covering really ugly walls. I was getting more miserable by the day and trying to surround myself with things that made me happy. In some ways it was probably a desperate attempt at putting my head in the sand, but I tried. I moved things around and tried to put up things that weren’t antagonistic (because apparently Labyrinth and The Princess Bride and Moulin Rouge are antagonistic). Then the issue became that I just liked too much fantasy stuff. And that I wrote. And did my own thing.

Yep. Apparently what was really going on in part was that I was very active in activities and when I was home I liked to curl up with a book/movie/or computer and write my own take on the worlds I loved. At the time I was still trying to find the genres that worked for me so I will admit to having penned some stuff that was considerably darker or more graphic than what I write now. And I was pretty naive still and figured that if a person asked to see what you were working on then they’d like it. It was all an exercise in finding my creative comfort zone…and at the time I was desperate for a comfort zone. It was like I didn’t fit in anywhere and for better or worse I was allowing myself to be cut off from my great friends who were nearby and my other close friends who were out-of-state. At one point my whole world was my daily routine and whatever was in my living space – my music-less and bare-walled living space.

And I was promptly told by the person I was seeing and his crowd that they didn’t know I was “that kind of girl” because apparently if you write anything that automatically becomes who you are. I never quite figured out if it was some of the content or the fact that I was writing genre fiction that was found more offensive. No ultimatum was given but obviously I am not with that person anymore and I quite like the writing thing still.

It’s took a long time to come back to myself after that and I will admit that because of that and other experiences that I can be very guarded when approaching relationships now (even platonic ones. I very rarely admit or show pictures/proof of what I do for a living right away because I get very nervous about what another person is going to say. Weirdly in a professional capacity I can deal with this just fine, obviously).  And to be clear I don’t /not/ go out with a person because of their musical or theatrical tastes…but I’m always a little more relieved if I find out that they like Bowie or Led Zeppelin. It’s fine if their tastes differ from mine and I can take good-natured teasing…but when it is constant and when it becomes derision is when I can’t take it and bolt.

Truth be told I did not go into The Other Man thinking of that experience. It started life as a much more comedic story – this poor sap haughtily coming home and just having no control over anything in his life. I don’t know at what point it evolved into Andrew having a huge secret of his own, but for me it fits. While I’ll never go around yelling my life story through a bullhorn I am pretty comfortable with myself these days. Plus, I’ve finally realized that a person’s always changing and that’s the way it’s supposed to be; I’m not trying to “be” a role or the person I think I should be acting like.  In living my life I’ve noticed that people who really have issues with other people’s likes and dislikes – to the point that they want them to change so they can be happy together – have something going on, and it’s usually way bigger than a band. Personally, if I’m into a person I could care less what they listen to. I’d prefer some common ground but I figure that’s the least of my worries. Same with film tastes or whatever.  (And really these days there’s so much more to me than music and nostalgia. Like puppets. And making giant demons. I mean really if you’re going to choose something to panic about there are much better choices than Bowie!)

I also love this story because the kids – especially the little girl – are just wacky (as normal kids are.) I think originally I was looking for an excuse to use some kid banter ideas I had and it all ended up here. I will admit that a lot of Miranda’s antics are tales on myself (though not all. The licking the plate bit was totally a family member because I would NEVER do ANYTHING like that EVER! Although I  did try to jail break when I was sent to my room quite a bit.)

That and the utter ridiculousness of Andrew and Bethany’s argument was what fueled the shorter original. And then when I came back to it and got my notes from the editor…something changed. I don’t know what – maybe subconsciously I was feeling that old argument that had made me feel so not myself – but it became much more of a relationship story. And it became much more of Andrew’s story. As unlikable as I find him I do find myself empathizing. It must be awful to try to live with the expectations that you think you’re supposed to have. He’s chasing a dream that isn’t even truly real – a Reader’s Digest version of the American Dream that’s been reprinted and made archaic by the changing times. And yet he keeps grabbing for it and becomes more and more jaded and paranoid. I found myself feeling sorry for him. He’s truly the opposite of how I’ve learned to live life and while I still found myself wanting to wring his neck I found myself more and more flabbergasted that I could write something so different from my own perspective. What he’s hiding is nothing I have first-person experience with, but it was very much in his character to go there.

Let’s face it: relationships are amazing when they work and frustrating and devastating when they don’t. And when a person isn’t comfortable with themselves there’s room for a hell of a lot of drama – a lot of it weird. Heck, life is weird.

So if you’re into weird, into music, and just plain want to see what the heck happens in this story – then please check it out!

All Andrew wanted was the typical American dream: a good career, a nice house, and a typical loving family. Instead he has a menial job, a small apartment, and children that remind him of creatures out of a sci-fi movie. To add insult to injury, he’s well aware that he’s not the only man who inhabits his wife’s thoughts and daily life. But how can he put up a fight when he’s reminded of the competition every time Bethany turns on the CD player? After one eventful dinner conversation when expectations, disappointments, and secrets collide, life may never be the same.

4 thoughts on “I love you…now change!”