At the risk of facing the firing squad, this week’s TT is from something different. I know, but I’ve been busy working on a few thousand things, the prompt is Cheat, and I just happened to have been working on this. This is from a novella I’m polishing up and blends together horror elements with a chick lit theme and structure. While I have ideas for Pike and Alyssa, I took the weekend off to regroup and I’ll probably work on their plot off on the side a little bit. I’m such a tease, I know.

This particular scene features the characters Alexis and Jack who are engaged. Alexis is a small-town librarian/writer and illustrator and Jack is a businessman who she feels is the closest thing to prince charming she’s ever going to find. Did I mention she’s a little sheltered, a little idealistic, and has a thing for fairy tales? Hee. 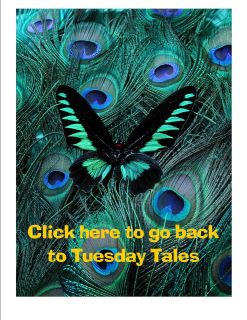 She took her time and ate another mouthful of pie before answering, letting the apples in their thick sauce melt over her tongue. Let him feel guilty; let him think about what he’s done. “Darling, I’m a librarian and a little sheltered, but I’m not stupid. No, it wasn’t my first time. It’s just been a while,” she murmured, her tone  sharper than she wanted. You won’t free him by being snide. You are a princess, not a witch, not an enchantress.

“Then what’s the matter?” He reached across the table for her hand and frowned when she withdrew it. Instead she fussed with her coffee cup on her saucer, but refrained from raising it to her lips.

“Why did you just happen to have a condom on you?” Her voice quivered just a little and she swallowed the lump in her throat. There was no place for crying when one was lost in the woods.

His eyes grew even larger and his perfect tanned skin turned abruptly pale. “Well,” he coughed, “I always held out hope that since we’re engaged you might want to reach that level soon, so I wanted to be prepared,” he finally replied, though he stumbled over his words.

She nodded. “That’s sweet.” Jack visibly relaxed into the kitchen chair she’d brought out. “I’m sorry if I took you by surprise.”

“Oh my God, don’t! Don’t be sorry! Feel free to do it more often!” he chuckled, and cleared his throat when she only raised an eyebrow. It probably wasn’t a good idea to hang onto her anger, but her shyness, her insecurities had all been battered away by these new developments. At last there was a situation that she knew how to face!

“Well, I know we didn’t plan on it, and I hope I didn’t make you late for anything.”

He frowned mid-bite and returned his fork to his plate. “No, not that I know of. What are you talking about? Do you want me to spend the night, is that it?”

“You received a phone call while you were in the bathroom. I’m sorry, I didn’t mean to just answer it. We do it at the library all the time; it’s a force of habit, I suppose.” Before she had been mortified at the thought of admitting that she’d even touched his phone. Now she felt powerful, powerful and mighty. He still just looked confused and uneasy.

“I don’t mind. It happens. Was it something important?”

“Some woman wanted you to drop by later.”

He nearly inhaled his coffee and she had to wait for him to stop coughing. Jack’s color was nearly ashen now and he didn’t look at all put together and sure of himself.  It’s all because of the witch. Let him feel bad for himself, if he even can under her spell.

“Look, I can explain. It was never serious. We met right before you and I got together, and it just kind of happened. Remember, for a while neither one of us were sure of where we were going, and I’m just a guy, you know? And really, I didn’t think that you’d ever have me! I figured you’d think you were out of my league!” He was babbling all the right things, he even looked sufficiently repentant. “Besides, I broke it off  with Becca before I asked you to marry me! I’m serious about us, Lexi.” This time she let him take her hand and even offered him a small smile.

“Everyone makes mistakes sometimes. But you still cheated. I have to know, do you really want to be with me?” She could feel her heart up in her throat, and her mind buzzed as she choked the words out.  Please say yes. If you don’t say yes then I’ve lost.

His appalled face was immediate reassurance. “Of course I do! Why wouldn’t I? Lexi, it was just one of those stupid things. She came on strong and I was a stupid guy. But now that I have you, she doesn’t matter. I haven’t even looked at her texts and calls.” He grabbed up his napkin and dabbed the sheen of sweat from his brow. “Is it hot in here all of a sudden? I don’t remember it being so warm.”

She ignored the diversion. “You haven’t deleted her number either, I noticed.”

He cleared his throat, took another long sip from his cup. “I’ve been meaning to, but I’ve been so occupied with you, with us. I’ll do it right now,” he added, reaching for the object of discussion.

She shook her head and took his hand again. “I just have to know for sure. Do you want to be with me?” The lump in her throat rose again, tightening her voice. Just the mere sound of her own weakness made her eyes burn.
“Yes! Yes, of course I want to be with you!” Jack blurted and came around the table to scoop her up on her feet. Now that he’d been caught Alexis couldn’t help but notice the weak tone that had crept into his voice. It was a relief he wasn’t fighting her, but how would he act if she was in real, tangible danger? It’s the witch! She’s stolen his spine along with his mind. But I’ll beat her. His heart belongs to me and only me.

His long fingers brushed the tears from her eyes and he cupped her round face, his dark eyes serious, though now she couldn’t bring herself to fully believe the emotion there. “Honey, please. Listen to me. I made a mistake, but it won’t happen again. I meant what I said earlier. I love you! You’re mine and I’m yours! You’re my princess, my heart’s true love!”

Her smile reappeared like magic and she gripped his wrists in her hands, pressing his palms against her cheeks. “Do you promise? Promise that you’re only mine?”

He nodded, but then shook his head as if he was momentarily trapped in a fog. “Of course. Yours alone, Alexis. Forever and always.” Jack leaned in to kiss her and swayed, disoriented. “Why’s the room spinning?” He pulled away from her and stumbled back into the table, knocking his chair off its legs when he dropped to his knees. Jack struggled to get to his feet, but crumpled into a pile on the dark blue carpet. “Alexis?” he gasped before his head fell back and his eyes drooped shut.

“Good,” she murmured, and bent to finish the last few bites of her dessert, wrinkling her nose as her critical tongue swept around her mouth. Needs more nutmeg next time. Lexi looked down at her fiancé and sucked the last remains of sugared syrup from the prongs of her fork. As thirsty as she was, she avoided the coffee. “I was hoping you’d see it my way.”

And as always, be sure to check out all the slammin’ stories from Tuesday Tales

2 thoughts on “Tuesday Tales: Happily Ever After”