Don’t you love it when you take off for a couple weeks and it turns into…uh, more than a couple weeks? Yeaaaah. Anyway, we’ll get into that later. For today, let’s look at an amazeballs new book out that’s sure to grab the interest of horror fiends and music fans alike! 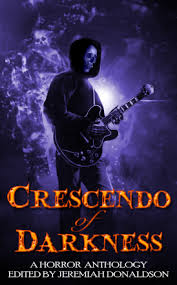 Music has the power to soothe the soul, drive people to obsession, and soundtrack evil plots. Is music the instigator of madness, or the key that unhinges the psychosis within? From guitar lessons in a graveyard and a baby allergic to music, to an infectious homicidal demo and melancholy tunes in a haunted lighthouse, Crescendo of Darkness will quench your thirst for horrifying audio fiction.

Please enjoy an excerpt below from Crescendo of Darkness.

“Keep the Beat” by Calvin Demmer

A young girl questions why her tribe plays the djembe drums

every night and finds it may be more than just a tradition.

It resembled clockwork. Dusk would fall, and the sounds of djembe drums, which ranged from thuds to slaps, would start. First, it was only one or two drums in the distance, but, within minutes, Aminata heard the beat all around her. It was a simple pattern, which didn’t end until night had blanketed the world.

Watching some of the villagers of her tribe prepare fires to cook, it dawned on her she’d never questioned why the drums were brought out. She inhaled burned wood scented smoke from the fires, wondering why people went separate directions into the jungle to sit alone and play. Were they providing amplified entertainment for the rest of the village while they cooked? There was no singing along with the beat as was usual when instruments were played—though she did hear a few people mumble along. As soon as it was dark, the drums stopped, the people returned, and everyone ate.

She’d approached Idrissa, one of the male elders she got along with best, after deciding to investigate the peculiar ritual. He was tall and muscly, which were common features among the men in the community. The drums had already started up their beat.

“You’re not wrong to question it,” Idrissa said, taking a seat alongside Aminata in front of one of the fires. “In fact, it’s a good sign. It shows you’re ready.”

“You’re ready to know more.” Idrissa reached for a stick and held it over the fire. Smoke rose from the end of the stick. “Maybe, you are even ready to participate.”

“I’m ready.” Aminata didn’t really feel the desire to hit on a drum, but if it led her to uncovering the purpose of why they were played, she was prepared to feign interest.

“Hmm. Perhaps you are ready.”

“Do you believe in ghosts?” Idrissa looked to the heavens.

“Have you ever wondered why we take the ill or severely wounded beyond the mountains?”

“You take them to the land of peace, to die. Like you did with my parents when they were ill and could not be healed.”

Idrissa nodded. “Yes. That was a sad day. You were very brave. But, there is more to it. The mountains surrounding us are very special. You see, if a person dies in the valley, their spirit can’t move on to the next realm. They remain stuck. We believe they live in caves in the mountain and are only able to roam the land at dusk.”

“But,” Idrissa said, making a fist. “Not all the spirits in the valley are friendly. A few warriors from tribes that once ruled these lands, or warriors who attacked our very tribe, remain.”

Idrissa picked up a djembe drum near him. Softly, he tapped the beat Aminata knew well. It was the same beat she heard every evening at dusk.

Idrissa stopped. “That beat. These drums. They protect us during dusk. Our village has been performing the ritual ever since we first moved to the valley.”

Intrigue lit a flame in Aminata’s mind. She didn’t believe the tale. Evil ghosts roaming the land at dusk were a step too far, but she couldn’t resist asking a question, either.

“What happens if the beat isn’t played?”

“Bad things.” Idrissa placed the drum on the ground. He seemed reluctant to release his grip and his fingers trailed over the drum’s animal skin. “You see, Aminata. Not only must the djembe drums be played every night, correctly. But, there can be no area in our defense where there is silence. The wrong type of ghosts will find that spot, and…”

Didi, one of the elder women, stood with her hands on her hips.

“Don’t worry.” Idrissa patted her shoulder. “Tomorrow, I will have a surprise for you. I will discuss with the other elders first, but I believe you are indeed ready for the next step.”

She followed Didi. Her stomach growled, as her mind tingled with many thoughts awakened by the old myth. She hadn’t received the truth, but she believed she’d obtain the real reason from one of the young adults. What she had received was a peculiar story. And now, she wanted to know why there was such a strange tale in the first place.

Was it covering up something else?

To read the rest of this story and thirteen

other horror music shorts, check out: