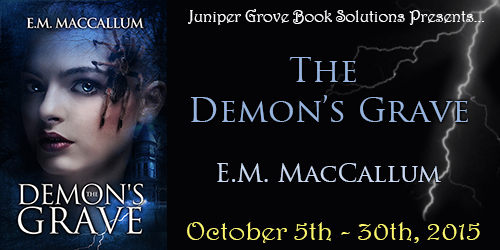 This title sounded perfect for an October post, especially for those whose tastes lean more to the urban fantasy side of things rather than horror. So let’s take a look, eh? 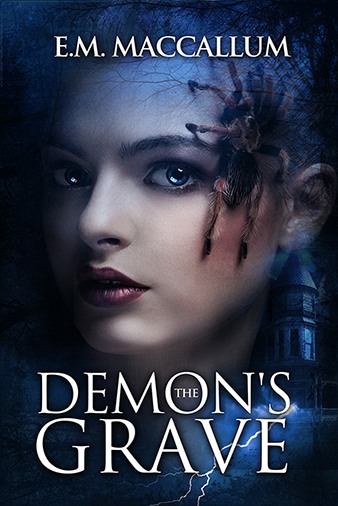 Synopsis:  When strange shadows and messages plague Nora’s daily life she fears for her sanity. To escape questions from her family, Nora joins her friends on a weekend getaway. Despite not liking Aidan Birket, Nora finds his remote, Victorian house charming. Until they discover the marble doorway on the third floor and, against Nora’s better judgment, they open it.

Trespassing into an unfamiliar world called the Demon’s Grave, the group face a charismatic demon and six nightmarish Challenges as punishment. Those that make it to the end can go home, but those that don’t will be his forever. Friendships are tested, secrets revealed and sacrifices will be made.

Nora battles zombies, doppelgängers, eyeless bikers, and the demon—whose interests are more than just a game of cat and mouse. If it’s all in her head, then it should be easy. But, if not, it means the demon knows about her sticky past, and the death of her twin sister.

“Aidan,” I insisted in a whisper.

A few car lengths north of the Chevy a stereo crackled to life. An echoing voice sang followed by a choir of voices that doo de doo’ed in the background. The slow song sounded like something from the 1950’s.

Read and I exchanged a curious glance as the echoing main voice mentioned a game. Read pulled his hand from mine and we both wiped our slick palms on our jeans.

“What is it?” I asked Aidan. “What should we be looking for?”

He didn’t answer, his eyes kept wandering to the cars then down the street and to the motorbikes.

Read’s shoulders sagged, exasperated. He looked ready to say something when the roar of an engine smothered the music as well as my yelp. It stopped Read cold.

Aidan jumped and grabbed my arm as if I were the one to save him.

Craning my neck to see if there was a single vehicle taking up the roadway, I saw none. It had been so loud I couldn’t pinpoint the direction it came from.

The music began to take over the street once more, a new song erupting from the crackling speakers.

Before Read or I could question him, Aidan stood up and started in long, purposeful strides, the kind that was harder to stop.

Read nudged me to move, or rather shoved me. Panicked, we hurried to Aidan. Looking to him, our pace quickened to keep up. Aidan stared straight ahead. His lean figure was rigid, but he hadn’t slowed.

Keeping close to the buildings, we passed the occupied car playing music. I could see three teenage boys inside. The muffled vintage music carried through the window.

I felt the scream choke in my throat as we passed. The passengers didn’t have eyes.

Their shapeless pale faces lacked not only the eyes but also mouths. The skin where lips should be had stretched horizontally, sealing any opening. The only portion of their faces that was noticeable was the lump of their nose—without nostrils. Even their hair was all the same color, styled the same, with a part in the middle, and they wore the same collared shirt and slacks.

I thought to myself, it’s just a few of the faceless, nameless people of this city, like any other…right? Maybe the demon had a sense of sick, very sick, humor.

I could hear, the eerie chorus of voices within the car, making it all the more surreal.

The three boys in the car watched us pass, as is if they could see. They turned their heads as we hurried along and I found myself staring back for as long as I could. 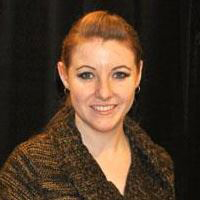 E.M. loves long walks through bookstores, Disney, horror movies/books, anything supernatural, and researching random facts. She lives by a lake out in the Canadian wilderness with internet access, her husband and rag-tag band of pets.

There is a tour wide giveaway. Prizes include the following: