Today’s guest post is by Marcia Colette, so turn down the lights, lock the doors and windows, and let’s fall into horror! 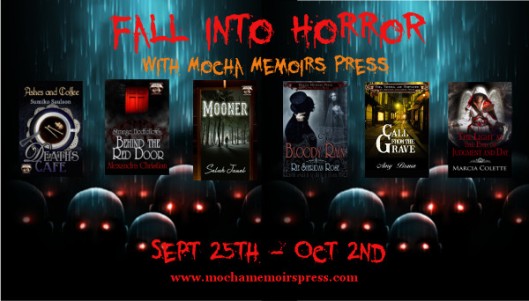 Welcome to Fall Into Horror with Mocha Memoirs Press!

Mocha Memoirs Press is celebrating the new Fall season by showcasing their love of horror and the authors who write it. Please welcome MARCIA COLETTE as she shares her thoughts on fall and horror.

It was about a week before it school started when I first started paying attention to the Halloween things that were going up on the shelves in stores. Honestly, I think the stores put out the drab things first to gain some interest and get them off their hands before they start putting up the really cool stuff on the shelves.

Anyway, I can’t help but go down those aisles because I love seeing the scary costumes, decorations, and party things on display. It makes me wish I had the time or the inclination to throw a Halloween party for my munchkin someday. I start thinking about how far I want to take my Halloween decorations, too. Do I want a giant blow-up pumpkin on my front lawn? Heck no. Do I want my front door to look like a haunted house? Uh-uh. Would I like to turn my garage into a haunted house? I sure would, but I also have this New York thing going on where my trust is hard to come by and I don’t want anyone stealing my stuff either. What about the candy? It’s not Halloween without candy. I don’t believe in doing the cheap stuff, but I don’t believe in getting a bundle of candy either. More than anything, I hate it when people give my child something like a box of raisins or some other crap that’s healthy. Yes, I’m a mom and I care, but I also believe in Halloween traditions that involve gooey stuff that sticks to my child’s fillings.

With my youngling being in kindergarten now, I can already tell things are different. She’ll probably need a Halloween costume for school and I’ll have to give her something “healthy” to bring to a class party. She’ll also need a sturdy trick-or-treat bag we plan on hitting as many houses in our neighborhood as possible. I’m hoping her school doesn’t ask for parent volunteers for the Halloween Party because I’ll end up forgetting that I’m an adult and end up rolling around on the floor with the kids.

Having a child, my tastes for the macabre have changed, in that, I’m more excited about something like Mickey’s Not So Scary Halloween Party (Disney World) than I am about Halloween Horror Nights (Universal Studios Orlando). Not because I don’t want to be frightened, but rather, I prefer to spend as much time with my daughter as possible and seeing life through her eyes. Things like blood splatter and chasing people around with chainsaws are not a part of the picture. That’s not to say I won’t get my healthy dose of The Walking Dead. Oh, heck no! I’m not that crazy. I’ll just wait until the youngling falls asleep before I watch it.

What decisions do you find yourself in the middle of as Halloween approaches?

THE LIGHT AT THE END OF JUDGEMENT AND DAY

Click on the rafflecopter options below for a chance to win the tour prize, a $25 Amazon Gift Card! a Rafflecopter giveaway

Mocha Memoirs Press, LLC is a genre-oriented publishing company. Their vision is to provide an outlet for outstanding speculative and romance stories that often fall beneath the radar of traditional publishing houses. They seek to provide quality stories that invigorate the reader’s literary palette like a good, strong coffee. Like great coffee houses, they offer a variety of flavors. They publish stories in the following genres: science fiction, fantasy, horror, and romance, including the sub-genres of steampunk, cyberpunk, diesel punk, alternate history, weird westerns, and mash-ups.