Today’s excerpt is again from Lost in the Shadows, and it’s one of those stories where the idea hit me hard but it took me a while to give myself permission to write it. I’m not a hard sci-fi writer by any means, but I love the more emotional and literary work of Ray Bradbury. Plus, when I heard a radio report about how the song Across the Universe had been beamed into space, well, I couldn’t not write this. This is also one of those stories that prompted Susan to ask what the hell was going on in my head at any given moment, heh. This is only a small part of the story, but it’s very much a love letter to one of my favorite authors as well as my deep connection to music. In the story a group of select criminals with a generations-old grudge set out to obliterate a certain planet, but run into a rather odd communication signal in the meantime.

“Excellent,” Spaulding purred. “I don’t need to remind you all how important this is. Failure is unacceptable. If you fail the Coordinators attempt for any reason and live, I have permission to execute you myself.” It wasn’t an empty threat. Her own strength was that she’d come from a long line of murderers. While that wasn’t particularly atypical on Planet 1312, the Spaulding line had turned it into an art form. It wasn’t that she was sadistic, although she could be, or brutal, though she had been. It was that she knew when to use her gift and how to use it to the fullest ability.

That was the trait every one of them shared. They were the experts the inhabitants of Planet 1312 strived to be. After all, in a society populated entirely by descendants of criminals, it was still important to take pride in one’s worth and strive to be the very best.

Long ago, when Earth had just begun to get a handle on long-range space travel, its first uses hadn’t been for exploration or discovery, but exploitation. With NASA’s influence fading, private corporations had funded the technology in hopes of opening up a new vacation industry, not to mention the opportunities colonization could bring.

First, though, the shuttles had to be tested. Times being what they were, they had ben filled with the overflow from prisons, homeless shelters, and even a few of the more vocal dissident groups had been plucked off the streets to fill space along with a handful of daring, clueless scientists. Family members and friends had simply disappeared from their lives and work one day. Some of their relations had never found out that they weren’t dead, but in a stark metal box hurtling through space.

After a good year of travel, the shuttle landed on Planet 1312. It was further than the shuttle should have traveled, but those that had volunteered (or had been volunteered) to lead the expedition were well-aware that kinks in the system still had to be worked out. It wasn’t until they tried to arrange their return flight that they realized there wasn’t enough fuel to get back to Earth and thesupply logs had been doctored. Only then was the full scope of the plan realized by those stranded on the planet.

They were well out of reach of communication, but the planet was fortuitously habitable if one didn’t mind reverting back to primal instincts. Many died in the following centuries. Those that didn’t never forgot their hardened roots or their betrayal. Miraculously, through luck and sheer force of will, the little society adapted and evolved, eventually regaining some semblance of technology and standard of living. Now, nearly a thousand years later, their descendants were returning home to deliver a long-overdue thank you gift.

The captain smiled a cruel little grin, the only admission of pleasure she’d allow herself during such a serious mission. “And you’re certain we shall meet with no retaliation?”

“We shouldn’t. Our communications and data retrieval are slow, to be sure, but reports over the past ten years indicate that attention is focused inward. All surrounding colonies have been called back to help with the war that’s been going on,” Natalo replied, her lovely face turned stern as she focused on the readouts glowing across her screen.

“If they’re so desperate to destroy themselves, we’ll be happy to help them out,” Kirksan quipped. The others snickered and although the lack of focus irritated Spaulding, she allowed it. It wasn’t like there would be time for celebration afterwards if things went according to plan.

As expected, everyone went right back to what they were doing after their mirth was spent. There wasn’t time for wasted emotions. Anger and a long-taught need for vengeance had followed them all their lives. The story of their civilization and how they would make Earth pay was one of the first bedtime stories they all heard, the first school lessons, even the first Sunday School lessons. There was no room for empathy or titillation, just as it was too dangerous to get too angry or caught up in their eventual upper hand. Their entire planet had only the one ship, the one bomb, the one chance.

“Approaching now. Shall I bring us out of lightspeed, captain?” Godren asked.

“Go ahead,” she replied, her grey eyes as sharp and severe as the rest of her. “Weapons?”

“None so far, but I’ll have a better idea in a few minutes when we slow down,” Natalo soothed.

“They’re too wrapped up in their own drama,” Godren muttered under his breath.

“Be that as it may, we cannot assume anything,” Kardra reminded them. They meant well, but they required a firm hand to keep total focus. Luckily she had always had an unwavering hand, whether it was holding a knife to someone’s throat or poisoning the water supply of the neighboring community when they’d kidnapped her brother over a supply battle. “Our systems are barely up to what we remember from Earth’s capabilities ages ago.”

“If they’re so advanced, then why weren’t we spotted and dealt with yet?” Kirkan pointed out.

It was a fair question. Captain Spaulding would have loved to come up on the planet, guns blazing, but a stealth approach was necessary. All they had was the one bomb, some basic laser cannons, and their ramshackle shields. Their speed was still not as advanced as the intel they’d gleamed on Earth’s fighter crafts eight years ago. She’d love to believe the whole planet was not paying attention, that the lunar and martian colonies were truly vacant and unable to warn the arrogant fools. She wouldn’t bet on it, though. The tendency for caution had not only kept her alive, but made her successful. It’s good to expect the other shoe to drop, she reminded herself.

A light on the console flashed and something pinged a tinny, sing-song of a noise. It was a quietly mocking noise.
I knew it, Karda thought, and her fist clenched, her mind swept up in black clouds.

Everyone’s breath in the little cabin caught and stopped.

“What is it?” the captain barked, straining to keep the tension out of her voice. Coolness and calm. You are the leader. Though if their whole society had worked so hard and so long only for them to be shot down now…
“It’s just a comm message,” Natalo reassured them. As one, the crew of the unnamed ship exhaled. “It’s that transmission we intercepted a while back. It’s finally coming through on our hunk of junk system.” She paused, scrolled through the readout, and hit a few keys. “Would you like me to play it? It looks fairly antiquated.”

Spaulding paused and considered. It would take their system a few minutes to fully slow and get into attack position and even antiquated information could prove useful. “Ready the obliterator. Lock in the coordinates and continue deceleration,” she ordered before addressing Natalo. “Go ahead. At the very least it will give us something to listen to while the obliterator is primed.” The crew followed her commands with utmost precision.

She was proud that her voice sounded as composed as it did. In less than thirty minutes, we’ll be dead and our names will be sung in future war anthems. Our faces will be painted in the Hall of the Brave in the capital. She said nothing of this or the sudden rush of violence and pleasure that their long-awaited victory gave her. If only I had time to spill blood one last time before the end…that would make it all perfect. The calloused fingertips that had strangled their share of the opposition felt fuzzy and awkward from the rush of adrenaline. Looking around the cramped space proved that although her crew was trying to keep poker faces in place, they were squirming and fidgeting from their own excitement. Although they kept on task their faces held the same hungry, feral feeling Captain Karda Spaulding felt echoing through her.

Natalo opened the comm frequency and cued up the signal they’d recorded while still in deep space. For a moment there was silence, then static. “I don’t know how great the quality will be,” she admitted. “It’s ancient and our systems aren’t the best—oh,” she breathed, then snapped her pouting lips shut tight. Her shoulders hitched and chest heaved a few times before she reigned herself back in check.

Patyn and Kirksan sat up straight with sharp intakes of breath. Even Godren drew himself to attention, as grizzled by hard living as he was. Spaulding herself let out a sharp gasp, as though the sound was a dagger blade that sliced straight into her soul.

Music. Of all the things to intercept, it was music. 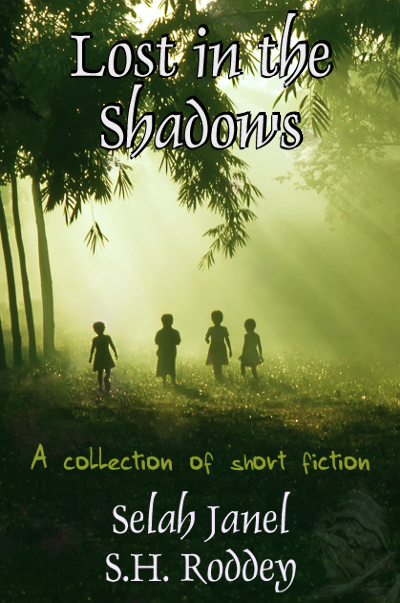 Journey with authors Selah Janel and S.H. Roddey to a world where every idea is a possibility and every genre an invitation.

In this collection of forty-seven short stories, lines blur and worlds collide in strange and wonderful new ways.

Get lost with the authors as they wander among fantasy, horror, science fiction, and other speculative musings.

Shadows can’t hurt you, and sometimes it’s all right to venture off the path.

Reminder: I’ll be at the Imaginarium Convention all this weekend, so come on out to Louisville to meet me and some other amazing authors! I’ll even sign Lost in the Shadows for you right there!

Also, you have until Sept 17 to enter the Night Owl Book Reviews contest – be sure to check around my blog for a hidden entry word…(pssst, go look at my books!)