Tomorrow Comes Media/Seventh Star Press are looking for a few good bloggers and/or reviewers for hosts in six upcoming tours! Each title is linked to the sign-up form. 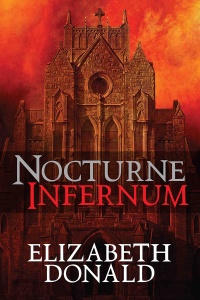 About Nocturne Infernum: Nocturne Infernum includes the original three chapters in the Nocturnal Urges series, an alternate version of present-day Memphis in which vampires walk among us, but are not treated as our equals. They work the night shift, the jobs no one else wants, and they’re not too happy about it. Meanwhile, humans take advantage of the pleasures vampires can provide, but call them friends? Lovers? The gap between human and vampire stretches wide as death rises in the streets of Memphis.

Darkness with a Chance of Whimsy by RJ Sullivan – if short stories are more your thing, be sure to check out this diverse collection! 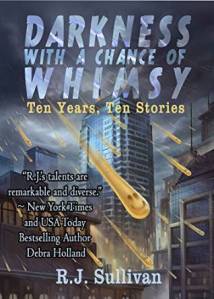 About Darkness With a Chance of Whimsy: Collected for the first time since their initial publications, Darkness with a Chance of Whimsy presents ten tales from the imagination of R.J. Sullivan. Thrills and chills await you, but you may also get blindsided by the absurd. This volume includes a pair of stories featuring Rebecca Burton, the mysterious investigator of R.J.’s acclaimed paranormal thriller series 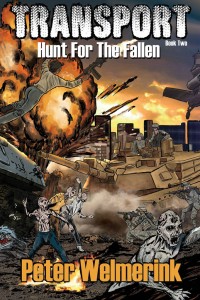 Amassed at the UCRA east end enclosure, the dead strain the fence line while soldiers keep watchful eyes, the survivors on the opposite side of the rising river about to lose their minds.

It’s a crazy time: nonstop precipitation; everyone’s up in arms; paranoid city council members with an asshat City Treasurer. Water, water everywhere. Zees dropping into the churning drink. Troops afraid of being stitched up and thrown back into the fray as Zombie Troopers. Tank commanders getting itchy to head out on their own after drug-laden shamblers. Reganshire insurgents trying to extract our west side civvies for some unknown reason, possibly pushing the city into taking heavy-handed action against them.

Then there’s some black-haired dead dude staring at me through the fence, grinning like he’s off his meds.

And I thought Lettner was a headache.

All this sh*t might give me a heart attack.

Hunt for the Fallen is Transport Book Two

Shadows Out of the Sky by Brick Marlin (horror)

About Shadow Out of the Sky: A scarecrow crucified on a wooden cross made from a pair of two-by-fours sits in a field of corn, placed there to frighten away birds and protect the crops. Under its straw hat large buttons pose as its eyes, placed there by child’s fingers, view something sinister in the grave sky, appearing in front of the full moon.

Twisting, it forms into a sleek black mass, peering down upon the town of Woodbury. Four demons called The Reckoning has pulled this shadow, this urban legend from the past, out of an unmarked grave to bring terror across the planet, shoving it toward an apocalypse.

Now it cuts through the air, as if it were opening wounds in flesh, peering down at the first house that it hovers over…

About Blue Spirit: Gamer girl Skye MacLeod can see fairies, but only when she’s tipsy. More Grimm than enchanting, some of these fairies are out to ruin her life, wreaking havoc with her job, her home, and her relationships.

With the help of her tiny fairy friend Minnie, Skye has to protect her vampire wannabe gamer friends from all-too-real supernatural threats only she can see. Can she keep it together and hold fast against a wicked fairy Queen’s plot?

Blue Spirit is the first book of A Tipsy Fairy Tale series!

Claire has a magical way with words-literally. But a mystical power of persuasion isn’t the only thing that makes her different. Half-French and half-Indian, Claire doesn’t feel at home in either world. Maybe that’s why she’s bonded so tightly with her fellow outcasts and best friends: Phileas, a young man whose towering intellect and sexuality have always made him the target of bullies, and Sam, a descendant of George Washington who shares the disgraced general’s terrible, secret curse.

But when Sam’s family is murdered, these bonds are tested and Claire’s special ability is strained to its limits as the three hunt the men responsible into dangerous lands. Along the way they cross paths with P.T. Barnum, William Frankenstein and other characters from both history and fantasy as they learn the hard way that man is often the most horrific monster and that growing up sometimes means learning to let go of the things you hold most dear.

One thought on “Calling All Book Bloggers/Reviewers!”