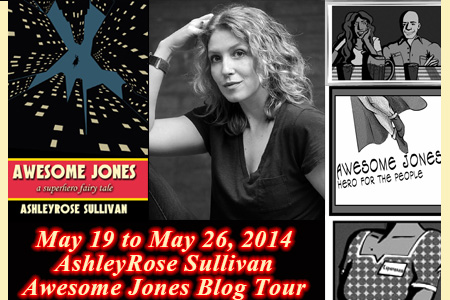 Hello, blog tour time! Today I bring you Ms. AshleyRose Sullivan and her unique title, Awesome Jones! As per usual, before we talk to her, let’s take a look at the book! 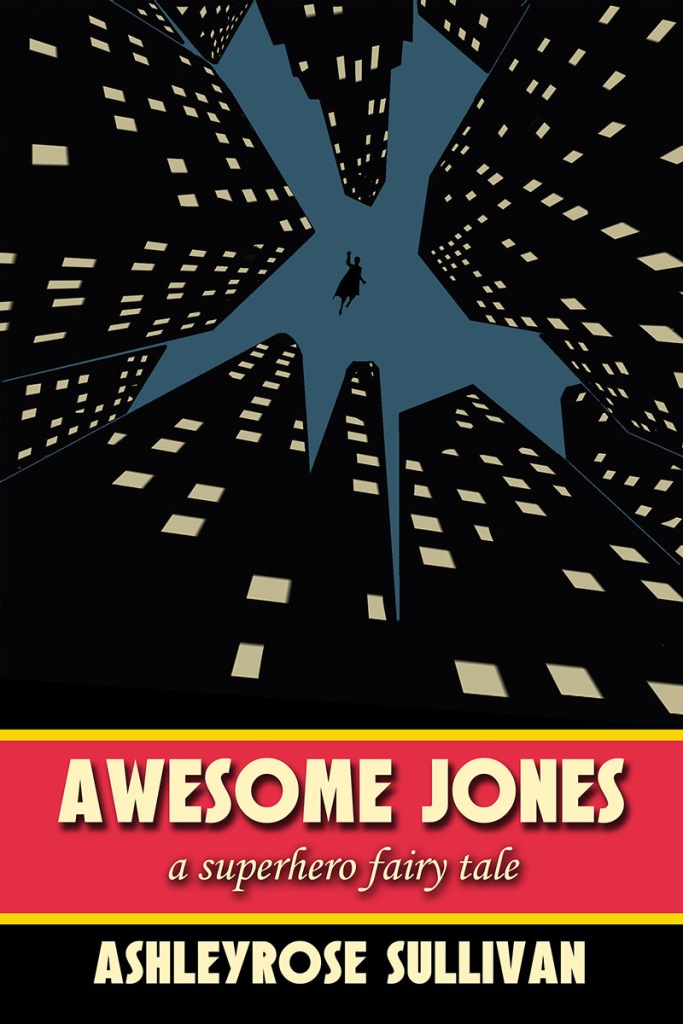 The only thing Awesome Jones wants is to be a super hero. Until he falls in love.

Despite his colorful name, Awesome Jones is a painfully average man who dreams of being a super hero, just like the ones who patrol his city. It’s been that way since he was a little boy, raised by his grandfather after his parents’ death.

The day Jones starts his new job as a file clerk at Akai Printing Company he meets secretary Lona Chang and everything changes. Lona sees something in Jones that no one ever has and the two quickly become inseparable. But when the perfect pair’s domestic bliss is threatened by a super-powered secret from the past, Awesome Jones has to make a choice. He must decide whether he should play it safe or find the strength to live up to his name and risk everything he’s come to love to save the day like he always dreamed.

SJ: Every writer has some sort of process. Give us a glimpse into yours. Do you meticulously outline? Do you write depending on what calls are out there?

ARS: You know, I’ve tried a lot of different approaches when it comes to the novel process but what works best for me is a combination of notes/outlines. I start with a general story idea and I buy a 9.5×6” notebook. For as long as I can, I take notes. Everything I come up with, everything I think about while reading stuff for research, maps of cities, layouts of houses, the way a characters’ clothes look–it all goes in this little notebook. I create horrendous story knots in this stage and then, as I progress, I try to untangle them. Once I feel like I have a real grasp of the story, I move to an outline. I start with simple bullet points. When that’s finished and I can “see” the story, I add little bits of extra stuff under each point until I have a pretty thorough outline that’s about 10-15 pages long. Then I start writing the book.

SJ: Bonus question ­ Do you put on a cape and do a chant before hunkering down to work? Sacrifice anything? Along with your process, what’s your quirkiest writing habit?

ARS: It’s hard to say whether any of this is actually quirky. It’s just the way I go about my writing life. I suppose it is a little strange that I sit on the floor when I write. I have a little floor desk and everything. Also I eat and drink constantly.

SJ: Are you a meticulous planner or do you believe in the muse? Where do your ideas come from? Do they filter in through your dreams? Do they show up at inopportune times and whap you upside the head? Do they result in a shady deal with a dark power?

ARS: My ideas come from everywhere. A lot of the time they’re a mishmash of other stuff. A kind of PB&J of whatever things I’m currently obsessed with. Some of my story ideas have come from an Audubon Magazine someone left at the gym, driving past a Civil War hospital every day for a year, making jokes about ridiculous names with my husband, and late night viewings of 1970s strongman competitions.

Oh man, I wish I’d made a shady deal with a dark power. Do you think that’s still possible? I feel like all this is way harder than it ought to be but I can’t really do anything else. Maybe I made a deal without knowing it…

SJ: bonus question – If your muse had a physical manifestation, what would he or she look like and how would she or he act? Is it a sexy superhero version of Callisto? A sharp­tongued rogue? A reptilian alien? Do they have a catch phrase?

ARS: I think my muse is pretty much a pocket-sized Bill Murray.

(SJ edit: Congrats, AshleyRose, you win at life with such a muse..)

SJ: What’s the book/story that’s closest to your heart? Is there a piece that you clearly feel is a piece of you? Do you play favorites?

ARS: All of my stuff comes straight out of me. I tend to wear my heart on my sleeve and it smears on the page as I write. Awesome Jones is very important to me, I worked on it over a pretty long period of time (seven years) and it evolved and grew as I did. I vividly remember writing specific pieces of it into a notebook all those years ago and I (just as vividly) remember ripping a lot of that stuff out as I revised five or six years later.

Silver Tongue (my YA Alt-Hist fantasy novel) will be released by Seventh Star this fall and it also took its life from my own. Though, it was great fun (and much quicker) to write, it was important for me to write a book for my fifteen year old self.

Also, each of my short stories are cut straight out of me. I love writing in short form and, because my prose tends to be rather sparse, my style lends to that format.

SJ: If you could only write one genre ever again upon pain of being sacrificed to Cthulhu, what would it be and why?

ARS: Hmm. Well, all my stuff is genre-bending. Comic/prose/adult with crossover YA/superhero/fairy tale. Alternate History/Fantasy/YA. Can I just pick “Magical Realism”? I feel like that’s cheating.

(SJ edit: As a magic realism advocate, I can assure you that no, it’s legal :D)

ARS: There’s just never enough time. I’m not talking about deadlines or whatever. I just mean, there’s not enough time in the day or the week or a human lifespan to do all the stuff I want to do as a writer. I love reading stuff and watching stuff for research and I often wish I could stop time and just do those things and then stop time some more and write for ages without any interruption.

-A cliché? I can’t think of one. If I read a particular author often enough, their little tics will start to get on my nerves but I’m sure I have my own tics. If I can’t get into a book or a TV Show, because I don’t like the writing, I just stop reading/watching and move on to the next thing on my list. (Remember that “not enough time” thing I mentioned?)

ARS: Oh man, all my books/stories take place in ridiculous/dangerous worlds. But, I love the Awesome Jones world. Whether it’s Arc City, where the novel starts, or the more rural setting the book takes on later, I’d go.

SJ: Do you think it’s possible to develop a sure­fire recipe/formula for success as a writer? Would you want to, or does that compromise the art or the fun of it?

ARS: I don’t think success itself compromises the art or the fun of it. I think its not uncommon for writers to get to a certain stage in their career where no one wants to edit them or tell them no. That can be dangerous. Writers (including me) often need to be saved from themselves. Of course, if a formula existed and it worked, I’d probably take it. I think “success” varies depending on who you ask but for me, it just means getting my work into the hands of people who will appreciate it. If I could make that happen with certainty, I’d do it.

SJ: Everyone has words of wisdom for young writers, so I’m not going to ask you about that. With a few unknown writers becoming success stories, a lot of people seem to think it’s an easy career choice. What would your words of wisdom be to these people?

ARS: Ha! You know, if you want to be a doctor, or a lawyer, or even a rocket scientist and you work hard enough at it and you apply yourself and you’re willing to go into deep debt, you can do it. You can be a doctor or a lawyer or a rocket scientist. There’s a path to that. You know what the path is to being a successful writer? I don’t. You can work hard and you can apply yourself and you can go into deep debt and you can weather the storm of revision and rejection and late nights spent deleting what you thought (for too long) was an amazing idea. And you can do that for an entire lifetime and you still might not make it. So, my advice to anyone who says, “I think I could be a successful writer! Lemme just go churn out this novel.” Yeah, it does happen but seriously, don’t do this unless you can’t do anything else.

SJ: It seems like everyone likes to gang up on certain genres as being inferior, less meaningful, or cheap entertainment (especially if it’s speculative in nature). Make a case for the genre you write.

ARS: Well, I write speculative fiction I guess. That’s a pretty broad term that covers stuff like fantasy and scifi and magical realism and novels about superheroes. I also spent an entire year watching all of Star Trek. (All of it. Yes, even the Animated Series.) And, while I’ve always been a fan of this genre, it occurred to me while watching/writing about it how valid and even important it is to think outside our own reality. Speculative fiction presents us with an uncommon lens and through it we can see ourselves, our world, our history and our future in new ways. It strips away our biases by endowing us with the comforting notion that what we’re watching or reading is merely entertaining, maybe even silly. Once we let our guard down, though, we’re ripe for change. Speculative Fiction has been sowing the seeds of change and presenting us with alternate realities for as long as its been around.

SJ: What do you want people to instantly think of when they hear your name or your work mentioned?

ARS: That’s that geek girl, right? The one who writes and draws stuff and talks about Star Trek all the time.

SJ: Please tell us about your latest/favorite work or a little bit about what you’re working on right now. It’s plug time, so go for it!

ARS: Right now I’m working on the rest of the Awesome Jones series. Awesome and Lona’s story is a trilogy and, the way I work, I want everything to come together in a satisfying way. So, I’m essentially writing the next two books at once.

Also, this fall the first novel in my Alt-Hist YA series Silver Tongue is set to release and I’m super excited about it. I have an affinity for this trio of misfits and their adventure through Nouvelle France, up the Mississippi, and into New Britannia as they hunt down a group of mysterious murderers, is a fun (and dangerous) one. They meet all kinds of characters out of literature (Frankenstein) and history (PT Barnum) and get caught up in something much bigger than they’d ever dreamed. Claire, Phileas, and Sam were great fun to write and I can’t wait to work on the next one. 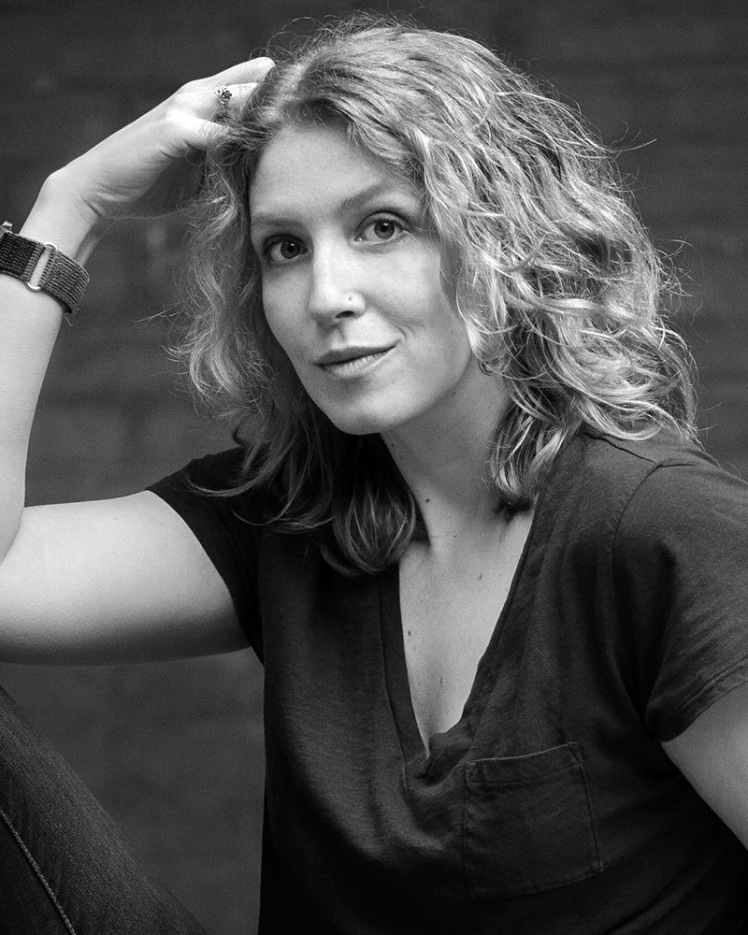 Born and raised in Appalachia, AshleyRose Sullivan has a BS in Anthropology and an MFA in Creative Writing. She lives, writes and paints in Los Angeles with her husband and their many imaginary friends.

One thought on “TCM Presents: Awesome Jones by AshleyRose Sullivan”