So most people think I do everything myself. This isn’t true. I have a lot of people I enlist for help. I also have a presence that skulks around me. It’s usually too shy to say anything other than to whisper all the ideas that I should be working on in my ear. After all, how do I manage a persona that’s so sweetly evil? Well, cons apparently bring this elusive muse out of hiding and for the first time ever I was able to capture her on film when she thought I wasn’t looking.

SH Roddey and I had set up our booth with all our lovely books and swaggy items. The problem was that we both had panels at some point, so we needed help to watch this thing and network for us. Just when I thought all was lost, I suddenly realized that someone had tagged along with me…

While Booth Babe Bill is more than capable of handling things, sometimes genre stuff takes a special touch. Enter Mary Sue Cthulhu. She accompanied me last year to panels, but was picture shy. This year she has a new zombie sock monkey hat that apparently gives her the confidence to show herself to the masses. Here she is handing out Lost in the Shadows swag.

Thankfully Susan didn’t mind when Mary Sue Cthulhu tried to give her pointers on engaging the public. 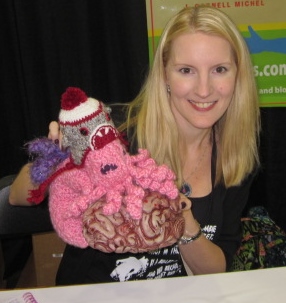 She really hit it off with J. Cornell Michel (author of Jordan’s Brains)  in the booth next door. She either has developed a taste for zombie fiction or liked feeding on her brain purse.

At one point I was back and forth at panels so I lost track of where she went. Then we all turned around and saw that she’d got herself into a bit of a, well…situation… 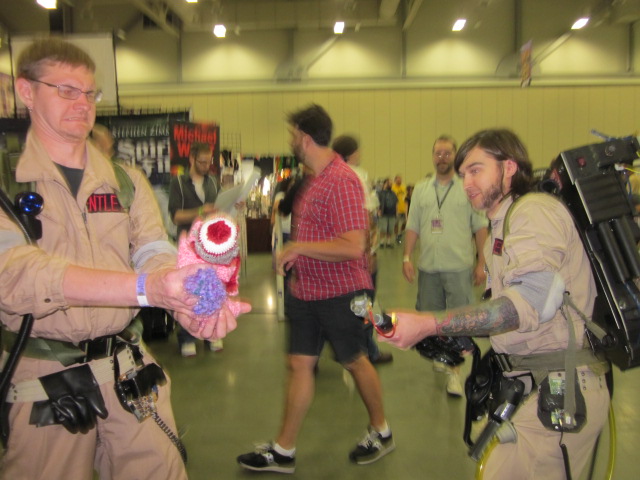 Sigh. I keep telling her she can’t taunt ghostbusters, but she never listens to me. 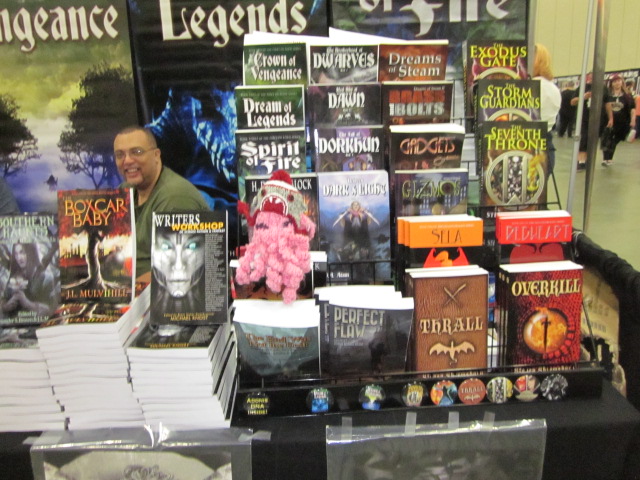 Thankfully, she got away and hid among the Seventh Star Press stacks. 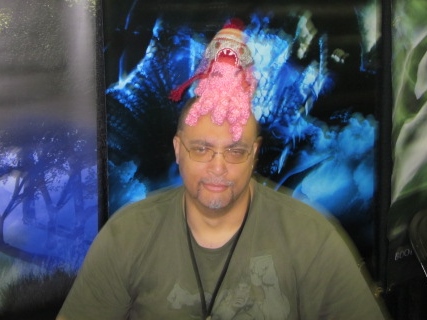 She’s an old-school sort of girl, so she’s not sure how to take urban fantasy. She and John F. Allen had words, but I think they finally reached an understanding.

She was really intrigued Haunting Obsession, though.

….Although she may have been a little too enthusiastic when she got a chance to meet the author, Rj Sullivan.

I’m not surprised to find that she really loves Poseidon’s Children, especially with all the killer fish people in it.

She may be the epitome of a sparkly evil eldergoddess, but she’s also a fangirl at heart. Michael West totally made her day!

At this point J.L. Mulvihill came along and reminded us that we had the cosplay panel.

She was a little self-conscious since she only had the one outfit. Thankfully, J.L. graciously let her borrow another hat so she could be appropriately steampunk. 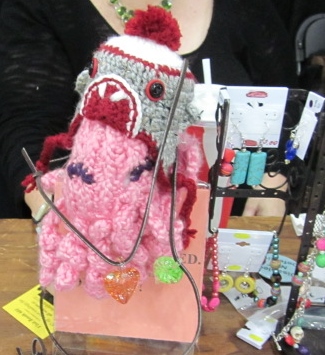 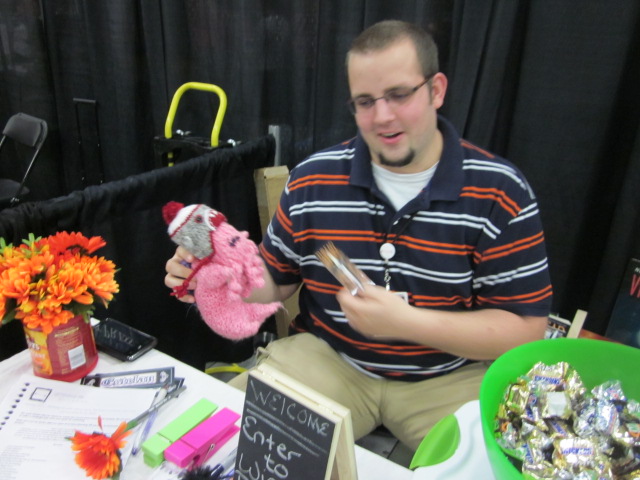 Then she noticed Josh Young of Jitterbug PR giving out free stuff, so she wanted to check out the bookmarks…

She may have gotten a little carried away with the free candy, but to be fair she hadn’t devoured many souls so she had to keep her energy up, somehow. 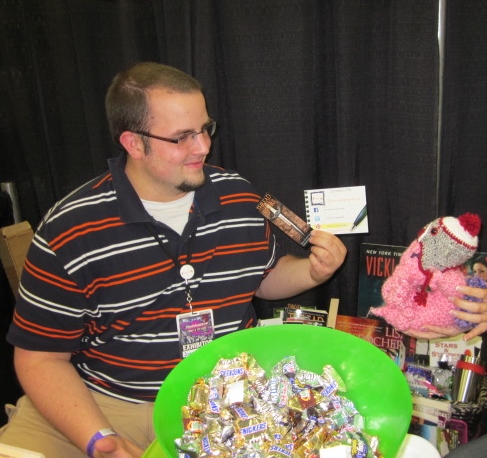 But then it was back to business. She feels that I need to bump up my publicity, so she sat down with Josh to discuss my options for me.

I’m lucky to have such a great muse and helper (even if she is either too shy to show her face or a complete ham once she gets going). She definitely kept things interesting. Who knows? Maybe she’ll show her face again in the future. You never know where a sparkly eldergoddess will pop up…