I’m always excited to share new books and series with people, and this week is no exception. This week I’ m proud to be a host for Georgia L. Jones’ Remnants of Life tour! She’s written an awesome guest post to share with everyone today, but first I’d like to get everyone acquainted with her new book.

Dangerous Saviors… What would you do if your life rested in the hands of something that really wanted to eat you? Come journey through the realms of the next world where everything you know about Good and Evil are put to the test.

Samantha Garrett lives and dies a good life in the human world. She awakens a new creature, Samoda, a vampire-like warrior in the army of Nuem. She is forced to realize that she has become a part of a world that humans believe to be only “Legends of Darkness.” Samoda finds her new life is entwined with the age old story of greed, love, betrayal, and vengeance.

Join our heroine as she battles not just for her own existence, but for the entire human race’s future.

First I would like to thank Come Selahway With Me for having me as a guest.  I love having the opportunity to share my writing. I would like to share my ideas and process for crafting a series and how character development is involved in this process.

When I first began to craft Legends of Darkness in my mind, I began with characteristics of one character and built on it.  I decided I wanted to have a strong female lead and Samoda began to come to life.  I got a picture of what she looked like in my head and began my search.  Once I found pictures and narrowed them down to the closest match, I began to actually make notes on the picture of different traits.  Since I was dealing with a creature that morphed into a vampire like Warrior, I made many notes about how she changed also.  Each time a new character entered the picture, I went through the same procedure to give myself a reference sheet on each characters physical characteristics.

I used this same theme throughout the whole first draft.  I considered these notes to be the heart of the series.  I keep a notebook that has each characters picture and different facts or personality traits in them, like a fact sheet.  If the storyline evolves, a character then their sheet or section grows.  It is very valuable and I’m pretty sure it would be very difficult to write the series without it.

“Witches,” the second book in the series launched on December 1, 2012.  It introduced several new characters and while I was writing it I referred back to the notes continually.  I find that when I’m writing it is easier to do this than to thumb back through different chapters in the book and try to find facts or features.

In my opinion an important feature of character building is keeping, not only the physical characteristics, but also the personality traits consistent.  In that respect, I value my beta readers unequivocally. When someone asks me, “Do you think Samoda would actually do that?” (Or any character.)  I have to look at it closely.  Most of the time, if a reader asks the question, in my mind there is a problem, because there is something inconsistent with the personality.  That is just my theory, but I try to use it always. When it comes to characters and their traits, I try to be conscience about what they would or wouldn’t do.  I usually keep, at the very least, mental notes on their favorite colors, possible mental disorders, music they like, and weird things like that. As each one evolves they become actual people in my mind with their own personalities and sometimes I really like them…and sometimes I don’t and they just have to die.

I have actually killed off characters just because they really annoyed me to write for.  A good example of this is from Legends of Darkness, the first book in the series.  I had a character named Kyan.  The more I got to know her and she evolved in my mind the worse she got.  I have to wonder how I even have such characters in my head, but I do sometimes.  Kyan was one of the first to be tried and executed during the Salem Witch Trials.  She was not a witch at the time but was reborn as a Warrior in the Army of Nuem.  She had been good, for the most part, but time had weathered her.  She became bitter over not finding a mate and fell for a very bad demon named Thomas when Samoda took the Warrior that she had been yearning for over the centuries.  She became as evil as the demon she mated with and from there it just got worse, so she had to die.

Another good example of character development is the ones that I haven’t even used yet.  Since I’m working on a series, I have different lineages mapped out for characters that are yet to come.  I keep a small list on the characters in which they are spawned from, (not directly birthed, but associated in one way or another).

My belief is that when you are crafting a novel, it is not much different than building a house.  You must have a set of blueprints in which to build it correctly.  You may liken the measurements to the personality.  Each one is consistent and must stay consistent for the story to fit together correctly.  Finally, you must build it on a firm foundation or it will likely not fall in.  I believe these things are especially important when building a series.

If you would like to learn more about my writing here are the links:

The links to purchase the books on Amazon: 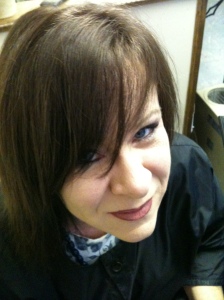 Georgia L. Jones was born in Columbia, Missouri on September 21st, 1968. In 1992 she settled in the beautiful Ozarks town of Lebanon, Missouri, where she met and married the love of her life. Together they have raised 7 children and have the 8th still in their home.

At a young age Georgia learned the value of getting lost in a good book. She has always enjoyed reading and letting her imagination run wild. In her early teenage years she began to put her own stories down on paper as she plunked out the words on an old manual typewriter.

In 1996 Georgia enrolled at Missouri State University where she majored in Psychology. While there she found an untamable thirst for Philosophy and Greek Mythology. Many evenings she can still be found curled up with one of the great Greek Tragedy’s or reading about personal continuity by Rene Descarte.

Over the years Georgia has harbored the dream of being a published author and written many short stories. On January 10, 2010 she embarked on the dream as she began to bring the characters from her first novel, “Legends of Darkness”, to life. Upon completion in June 2010 she realized that it was not a single book but a series and created the concept of the series “Remnants of Life”. She is currently working diligently on the “Remnants of Life” series.

Thanks so much, Georgia, for the insight and peek into your world! If you want to follow the rest of Georgia’s tour, you can find the schedule HERE

2 thoughts on “Remnants of Life Series by Georgia L. Jones”