This week we’re taking a look at another author friend discovery I’ve made lately – please welcome Dave Creek! Anyone who can invent their own world history and delve into the world of science fiction is all right with me! 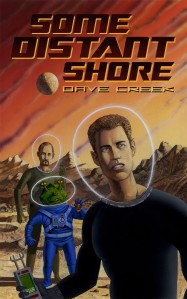 SJ: Every writer has some sort of process. Give us a glimpse into yours. Do you meticulously outline? Do you write depending on what calls are out there

DC: I find myself outlining in more detail the more I right.  At the same time, I make sure to stay open to new developments during the actual writing.  I try to stay “in the moment” as I write a scene and not think about the next scene, so that my characters act without the foreknowledge I have of what happens next.

SJ: Bonus question – Do you put on a cape and do a chant before hunkering down to work? Sacrifice anything? Along with your process, what’s your quirkiest writing habit?

DC: I don’t really have a writing “quirk,” I think, other than listening to movie/TV soundtracks as I write.  That’s mostly to drown out other sounds in the house.  I can’t do anything which has lyrics or too big a beat, so rock is out.  A lot of classical has too broad a dynamic range, either very loud or very soft, so that’s out, too.  The drama inherent in an orchestral soundtrack helps a lot in keeping me in the mood.  Composers from Jerry Goldsmith to Thomas Newman are my favorites — I even have some of their soundtracks for movies I’ve never seen.

SJ:  Are you a meticulous planner or do you believe in the muse? Where do your ideas come from? Do they filter in through your dreams? Do they show up at inopportune times and whap you upside the head? Do they result in a shady deal with a dark power?

DC: Some ideas just show up, and others I’ve been able to sit down and consciously create.  That latter talent emerged after I sold the story “A Glimpse of Splendor” to ANALOG.  Stan Schmidt said the planet Splendor would be a great setting for some more stories.  I’m no dummy, I know that when an editor hints like that you’d better get working.  So I came up with the idea that became the sequel “Splendor’s Laws.”  Since then I’ve published three more Splendor stories, with a novel about to make the rounds.

SJ: What’s the book/story that’s closest to your heart? Is there a piece that you clearly feel is a piece of you? Do you play favorites?

DC:I think my favorite story of my own is “Zheng He and the Dragon.”  In it, the great Chinese explorer, as it turns out, actually made First Contact with an alien being.  It took a lot of research into the real Zheng He and his times, because I wanted to fit the events of my story into his real history.  I also took the challenge of writing it in “e-prime,” which is where you write without using any forms of “to be.”  Don’t know that anyone ever noticed.

SJ: If you could only write one genre ever again upon pain of being sacrificed to Cthulhu, what would it be and why?

DC: It would be the same genre I’vemostly written in — hard SF with aliens, starships, unusual worlds, the whole space opera bit.

DC: No neck-wringing for me.  About the only frustration is the struggle to find an audience independently of my magazine appearances.  Writing isn’t my full-time job — I already have one of those, with my writing relegated to an hour or so a day.  I understand the importance of social media in self-promotion, but time spent doing that is time taken out of writing.  And when I read about writers spending six or seven hours a day doing social media and only a couple hours writing, I wonder how much more writing they could get done in that time.  And I have to wonder where they’re going and who they’re talking to for all those hours.  I’m looking forward to retirement because then I’ll have time to do both, and I can figure all that out.

SJ: Do you think it’s possible to develop a sure-fire recipe/formula for success as a writer? Would you want to, or does that compromise the art or the fun of it?

DC: A sure-fire recipe/formula for financial success would be good, because then I could be a full-time writer (the money would be nice, too).  But creatively it would take the fun out — finding out what you’re capable of is much of the fun.

SJ: Everyone has words of wisdom for young writers, so I’m not going to ask you about that. With a few unknown writers becoming success stories, a lot of people seem to think it’s an easy career choice. What would your words of wisdom be to these people?

DC: Shoot for the stars — that is, do all the things that you think will lead you to the creative and monetary success you want.  But in the back of your mind, you have to expect the worst, because most likely it ain’t going to happen.  There’s only one Neil Gaiman.  There’s only one J.K. Rowling.  Of course, there’s also only one Harper Lee, and she only wrote one book.  But it was the right book!

SJ: What do you want people to instantly think of when they hear your name or your work mentioned?

SJ: Please tell us about your latest/favorite work or a little bit about what you’re working on right now. It’s plug time, so go for it!

My first novel is SOME DISTANT SHORE.  It’s an expansion of an ANALOG novella from a few years ago.  Here’s how I describe it on my website:

A note from the author:

SOME DISTANT SHORE came about from my desire to tell a “big” story, one involving several alien races and some “Doc Smith” kinds of pyrotechnics with planets literally colliding, while not skimping on characterization.

If you don’t care about the characters in a story, all the plot machinations in the world won’t keep you reading.  Even readers who couldn’t recount the plot of a single Sherlock Holmes story can point to the man’s unique characteristics — his embrace of rationality over emotion, his need for his mind to be engaged in solving the puzzle of a murder or other crime, and how he resorts to the artificial stimulation of cocaine between cases.

One of my favorite quotes about characterization is from writer/director Joss Whedon (FIREFLY; THE AVENGERS): “You take people, you put them on a journey, you give them peril, you find out who they really are.”

I hope you enjoy the journey of Mike, Linna, Codari, Syradok, Govanek, and all the rest as they cope with perils both physical and emotional and they (and we) find out “who they really are.”

Thanks, Dave! For those who are curious about Dave and his work, you can find out more about him here:

And you can find Some Distant Shore on Amazon HERE