I’m taking part in a new event done by Makayla’s Book Reviews, called 12 Sentence Saturday! So for this week, I’m posting twelve sentences from my new release and first novel, In the Red! 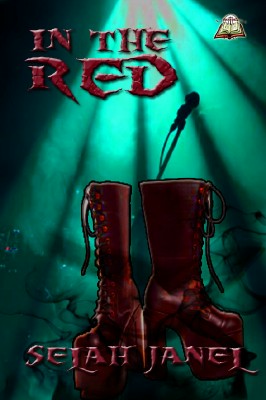 A quick look around proved that while everyone in the room was looking, Jack was the only other person that actually saw. “Did they just…?” Jeremiah couldn’t bring himself to say something so bizarre. He barely managed to hold back a cry when a thousand tiny needle teeth nibbled his skin from toes to knees. A tingling sensation spread under his skin and Jeremiah was filled with a rush of violent confidence that almost made him swoon.

“Good. They fit,” Jack said. Only his tiny, mysteriously cruel little smile hinted that he was aware of the boots’ strange behavior.

The longer Jeremiah looked at himself the more he realized that he could do no wrong. My life just changed. With these on my feet, my past is gone. I’m going to be better than I ever thought possible.

What kind of a rock star lives in a small town in the middle of nowhere and plays at weddings and funerals? Then Jack Scratch comes into his life, ready to represent him and launch him to stardom. Jack can give him everything: a new band, a new name, a new life, a new look, and new boots…although they aren’t exactly new. They once belonged to The One, a rocker so legendary and so mysterious that it’s urban legend that he used black magic to gain success. But what does Jeremiah care about urban legend? And it’s probably just coincidence that the shoes make him dance better than anyone, even if it doesn’t always feel like he’s controlling his movements. It’s no big deal that he plunges into a world of excess and decadence as soon as he puts the shoes on his feet, right?

Dance ’til you die.

Don’t forget to check out the other authors signed up for 12 Sentence Saturday!